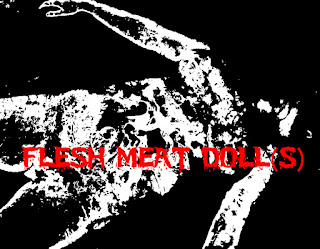 So after I reviewed the film Portraits of Andrea Palmer, filmmaker C. Huston sent me a link to his short film, Flesh Meat Doll(s). All I can say is... HOLY FUCKING SHIT. Take the brutality and gore in Portraits and crank that shit to 11, and yes, there's fucking in it. I really don't want to give anything away, because it hasn't been released yet, but my god, it's got to be the most REPUGNANT thing I've ever seen.

I mean that in the best way possible. It really does its job as far as shocking you, and the added taboo of pornography mixed with extreme gore absolutely kicked me in the balls. I'm not used to it, but if C. Huston and his company Tomorrow Productions keeps making these kind of movies, you bet your ass I'm going to be first in line to check it out. If I had to compare it to anything, which is pretty hard to do considering I haven't really seen anything like this before, I'd compare it to Japanese films such as Niku Daruma and Woman's Flesh: My Red Guts.

It's utterly nasty and what seemed like a 15 minute short, felt like an endless borage of some the most disgusting imagery ever put on film. It's a brutal assault on the psyche, and this film makes Nekromantik look like an episode of Sesame Street. I enjoyed the hell out of it, and it takes quite a bit to make my jaw drop but holy shit... Bravo, C. Huston. You are the fucking man. Once there is a physical release, I'm buying it.