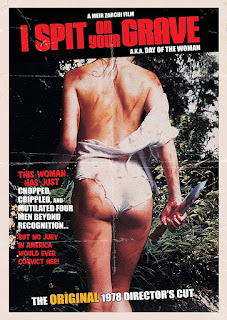 October is here, and what time is year is better than this! I figured for the entire month of October, I would review my favorite horror films of all time (yeah, I know, I missed the !st, but you know what, double the reviews!). For my first feature, I had to chose something I find completely gut-wrenching, but exciting at the same time. I Spit On Your Grave might not be the ideal Halloween movie, but it's absolutely one of the most devastating films out there. I personally love this movie, and every time someone asks me what they should watch when they want to dig deeper into more extreme stuff, I always mention this movie. Even to this day, my ass is hanging off the edge of my chair, and my teeth are embedded into my bottom lip when I watch this. It's so brutal, but they pay-off has you cheering at the end. If you want some crazy-excitement this Halloween, throw this classic on.

I Spit On Your Grave is a horror/exploitation film written and directed by Meir Zarchi. What's interesting about the making of this film, is that it's based off of a real life situation where filmmaker Meir Zarchi found a bloodied woman in a New York park after she had been raped by a couple men. This horrible situation fueled the story for what would be I Spit On Your Grave, or originally titled, Day of the Woman, and there film world would be shocked for years to come. The film is about writer Jennifer Hills (played wonderfully by Camille Keaton) who rents a cottage out in the woods so she can quietly write her first novel. When she arrives, she's met by a few men who take a liking to her. They begin to cruise by her cottage and stalk her, until one day they eventually attack Jennifer, and brutally gang-rape her. After the prolonged assault, the group tasks their mentally challenged accomplice to finish her off. He couldn't bring himself to do it, so he dips a blade in her blood, and shows them he did it. After Jennifer realizes she's alone, she tries to collect herself, and that's when she plots her brutal revenge. A little while passes, then Jennifer starts to make herself known to the ones who raped her, and one by one, she kills them all in the nastiest ways possible.

Like I said before, it's a tough watch, but they pay-off is just fucking incredible. I always tell people to tough out the rape scene, because after that you're just rooting for Jennifer to completely eradicate these pieces of shit. They get hanged to death, their junk cut off, sliced to pieces by a bot propeller, and more. The more I think about it, these have got to be the same thoughts that Meir Zarchi had when he found that woman in the park, like as if he imagined this woman's own revenge and what he would personally do to these rapists. I totally get that, as I react violently whenever I read about someone being raped at a local park or party. It's an absolute shame, but this movie tells assholes like them that there are strong women out there who are more terrifying than you think. I just enjoy everything about this movie, and if you're one of those folks who can stomach the prolonged rape scene, you have to watch this. It's just an incredible film and I'm not even sure what more I can say about it. Fucking watch it.