Repugnant Review: Sledgehammer (1983) - David A. Prior 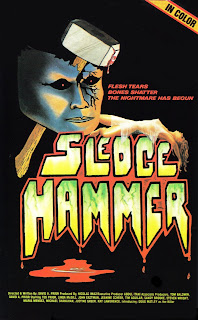 Ahhh yes... another SOV gore-fest. It's been awhile since I've watched these kind of movies, considering one of my last SOV reviews was on Video Violence 1 and 2, and that was 2 or 3 years ago, so I chose this to make up for lost time. Sledgehammer is a low-budget slasher movie about a group of teens who stay the night at a house that was the scene of a gruesome murder some years back, and one by one they're brutally murdered by a ghostly sledgehammer wielding maniac. Pretty basic set up for a slasher, but just like every other SOV horror film I've ever watched, it's all about the corny acting, and the over the top gore effects. Sledgehammer doesn't skimp on either of those things.

The film opens up with a woman locking up her son in the basement so she can cheat on her husband. Before she bangs this guy, he's smashed in the head with a sledgehammer, and then she is killed off screen. The movie then cuts to a group of "teens", as in, 30 year olds trying to play teens, getting ready to spend the night in this house where those two people were murdered. One of my favorite schlocky movie fuck ups is hiring older folks to play teens. It's hilariously awful, especially when there's a massive bearded guy with a receding hairline that would put Jack Nicholson to shame. The acting is brutally corny too, but it totally falls into the "so bad, it's funny" category. For me personally, I'd rather see silly over-acting than boring under-acting. Shit starts to hit the fan when a couple of the guys try to tell the story of the sledgehammer murders, tricking their friends into thinking the house was haunted and using a recorder to play spooky sounds and scare them. Little did they know that the ghoulish maniac (who switches back between his child form and adult form) is on the prowl, fading through walls, and leaving his sledgehammer in random locations of the house. I'd say that the highlight of any SOV horror video is the gore, because that always seems like thats where 80% of the budget goes too. It's always know gnarly and gross looking, even if it looks cheap, it looks pretty damn nasty.

Sledgehammer didn't fuck around when it came to the gore. The kills were pretty gruesome, and extremely bloody. I always felt that blunt objects like hammers were the most brutal when it came to killing people, and this movie really shows how shitty it would be to get bashed to death with a huge fucking hammer. The sledgehammer bash in the beginning of the movie looked so gross, with brain matter and blood spewing from the head wound, and it looked fairly convincing. The violence was absolutely the highlight of the movie, which for this kind of stuff... no duh. There's a 9/10 chance I'm buying SOV for the gore, not the story.

It's cheap, goofy, and corny as shit, but it's also super entertaining. These are the kind of movies you want to put on when you have a group of friends over, laughing at the acting but also roaring every time someone gets their head caved in. It's a fun, splattery mess, and I highly suggest this to any gore-hound looking for a fun, schlocky blood bath.


I couldn't find a trailer for the film, but here's a short clip. Silliness galore.