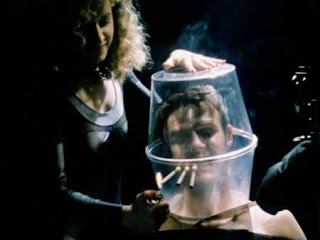 For the past couple years I've been slowly building a little collection of movies released by the notoriously extreme Unearthed Films. Recently I picked up the 1994 Ray Brady film, Boy Meets Girl, and I was immediately interested just by cover alone. A women in leather with a bound dude wearing a tank over his head, and the tank had a bunch of cigarettes sticking out the sides. I assuming it was going to be a gross torture flick, considering the gruesome material Unearthed Films is know to released (American Guinea Pig series, Thanatomorphose, Torment), but I was honestly surprised by the entire thing. It wasn't your typical torture porn... cause it really wasn't one at all. If I had to describe it, it would be more like a severely dark psychological drama.

Here's where the initial confusion came from. The synopsis says "A man meets a woman in a bar, the two go back to her flat and begin watching porno films. The man passes out and wakes to find himself strapped to a dentist chair. The woman, along with her accomplice begin to torture the man…". The movie has its brutal moments, but I feel like most of the film was dedicated to psychological torment rather than physical. Don't get me wrong, I love my gore, but this was a pretty refreshing watch. It's also very dialogue heavy, but due to great acting and great atmosphere, I wasn't bored, and I was pretty captivated by the entire situation. In the film, it's pretty apparent that these female torturers want to break this guy, not only physically, but mentally, and it's pretty brutal through out. Prodding him for info on his life, taking pictures of his family, and confessing to awful acts he's committed over the years. It puts you in one of those situations where you kind of feel bad for the guy, but he's a piece of shit, and you might relate to the torturer a bit, but she's also a piece of shit. It gives you somewhat of a moral dilemma, and I like shit like that. 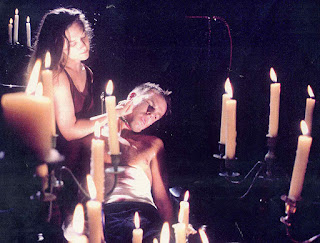 For a low budget shocker, I thought the film as a whole was pretty great. The minimalist tone to all the sets, considering there were only 3 main characters through out, and top notch acting, really made this film so much more than a typical "torture porn". It gets bloody and there's one particularly gory scene in the film, but other than that, it's pretty tame as far as violence goes. It's mostly about breaking someones spirit until they're mentally gone, and you know what... that can be just as brutal as any other kind of torture. Less messy, but hey, not everyone is into that. I totally recommend this, and I highly suggest you pick it up from the Unearth Films website. If you get it, let me know what you think!

P.S. I can't find a trailer anywhere but trust me, it's a great movie!