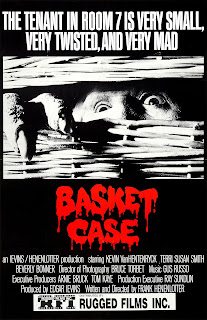 If I ever made a list of my top favorite filmmakers, Frank Henenlotter would definitely be in my top 5. His films are a perfect blend of gruesome gore and zany humor. Whether it's Frankenhooker, Bad Biology, or the Basket Case trilogy, I can keep coming back to them and still be incredibly entertained. Today, though, I wanted to review his first feature film, and one of my favorite movies ever, BASKET CASE. This movie has been in my rotation since I've been in my young-teens. My mom would go on movie binges every so often, and we'd scour all over Worcester County looking for all sorts of horror movies. One day, she picked up this and ever since we watched it, I was an instant fan. It was weird, bloody, and pretty much the perfect film for any teenager getting into crazier horror films. Recently, I rewatched this classic on bluray, and seeing it in HD was just mind-blowing. I knew I had to review it, even though I've seen this movie a ton, but there are some people I've come into contact with who haven't seen this yet, and it's one of those movies that needs to be seen. If you're not convinced by my initial love for this movie, then read on.

Basket Case is about a couple of siamese twin brothers on the hunt for the for doctors that separated them when they were children. The only thing is that one of the brothers, Belial, was more like a massive tumor with a humanoid face and two little arms. Belial was thought to have died during the surgery, but comes back to kill the ones who wrong him with his brother, Duane. Being as small as he is, Belial is always hidden away in a basket that is kept locked whenever the two are out an about, and I always liked the reactions of everyone who see Duane walking around with this huge basket. The two move into a skanky hotel/apartment building in NYC, as they're closer to the last couple doctors they need to take out, but throw in a couple curious neighbors, a love interest for Duane, and you've got a cluster-fuck of epic proportions on your hands. Once Belial is released, there's no stopping the little creep.

I really enjoy the revenge plot, because you do feel bad for Duane and Belial in the long run. Their father thought of Belial as a monster, and absolutely wanted him to be removed from Duane against his will. The scene is pretty unsettling and gruesome, mostly due to the fact that the Belial puppet was so human-like, and just for the utter fact that Belial did absolutely nothing wrong than exist. The doctors were particularly despicable, which made their horrendous demises all that much sweeter. The effects were pretty damn incredible, and I'll always be impressed with how unsettling the Belial puppet looks. Sure, it's a low-budget splatter feature, but what I really enjoy about Henenlotter's movies is that, even though these are over the top horror fests, he gives us characters that we like from the get go. I genuinely felt bad for Duane, cause not only has he been traumatized by the separation from his brother, but also the fact that he has to deal with his demented brother fucking up his social life. Every time Duane tries to go out and have fun, Belial goes absolutely insane and makes his brother's life a living hell.

After Basket Case, Frank Henenlotter started to add more humor to his films, and you can see that more and more with the sequels. I think this one is the best, because it is has such a solid revenge plot with characters you did feel bad for, and the sequels just get a bit too silly compared to this one. It's a pretty dark and gritty film, with a couple humorous parts, but it just keeps you interested in the lives of these brothers, and all the nasty stuff they have to go through to complete their objective. Belial is truly a great and underrated movie monster, and I still get the creeps every time I see that little shit. Basket Case is truly a fun horror movie, and it's been in my Halloween rotation for over a decade now. If you've never watched it, go out and find a copy. I think I payed about $10 for the Something Weird Video bluray, which was totally worth it in my opinion. Once you buy it and watch it, let me know what you think. I'm pretty sure you're going to enjoy it as much as I have!