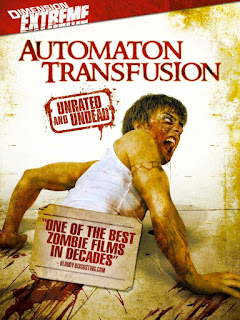 You might think I talk about High School too much, but you know what... I'm getting old and some of that nostalgia is working its way back into my memories. One of the best memories I'll ever have is skipping school on Halloween with my buddies, and watching horror films all day. The best part was that our parents were in on it, and let us continue this ritual throughout our last couple school years. We kept a good list of movies we would watch every single year, and one of those movies was the 2006 gore-soaked zombie film, Automaton Transfusion. I haven't watched it in years, so when my girlfriend recently wanted to watch a zombie movie I figured I'd take the opportunity to re-watch a school days horror classic. Did it hold up? Well, kinda.

Automaton Transfusion is a pretty basic zombie film. The Army started to develop a way to revive dead bodies for their own benefit, only to accidentally release the virus onto a small town. When the town is completely overrun, it's up to a group of teenagers to fight back and find whoever is behind this. Even though it may come off as a generic zombie film, the gore and action absolutely make up for it. It's a complete blood bath and the special effects are pretty gnarly for a low budget film. One of the best scenes in the film is when a zombie walks in during a party, and just rips a fetus out of a pregnant woman. I remember my friends and I rewinding that several times, just out of pure hilarity. I also feel like I should talk about the soundtrack, because it's honestly the kind of stuff you'd hear walking into a Hot Topic in the mid-2000's. The golden days of emo/screamo/post-punk all crammed into one gory zombie movie, and even though it felt dated, it did bring me back to those high school days. Absolutely cheesy, but I love it.

My only gripe for this film is the acting. It's pretty terrible, but I can't really shit on it too much. It's a low-budget feature with no name actors who've probably never acted before, but the gore and overall story did make it worth it. It holds up for the most part. I still enjoyed watching this, and it did bring back some pretty awesome memories. I highly recommend Automaton Transfusion to anyone who enjoys balls-out zombie flicks, and insane special effects. There's a few more films I want to look into again, because our old Halloween lineup was full of goodies from that era. More to come for sure, especially now that fall is here!