June 7th of this year marked ten years since I've graduated High School. Holy shit... ten years already? Time seems to be moving faster and faster every goddamn day, and now I'm getting hit with the nostalgia bug and looking up all the old junk I created with friends over the years. I put out a compilation of shorts I made last year, but this blog post is dedicated to the most elusive of all the shorts I've worked on.

Tics is a short film that was directed by my good friend Lindsey Brodeur (Marble), and it starred Bob Brodeur, Tyler Aucoin, Wyatt Adams, and myself. I remember getting together with everyone at the old abandoned dye mill in Dudley, MA, which was about a 5-10 minute walk from all of our houses, and literally just coming up with shit on the spot. Purely amateur, but we were all 16/17/18 years old and we had no fucking idea what to do. We were also trying to make a deadline for the Shepherd Hill Horror Movie Festival that Ty and I were putting on at our high school, so it was thrown together all on the spot, but we had a hell of a time making it. Holy shit, I even remember all the stupid shots we had to keep retaking because we were goofing off so much, particularly the scene where Wyatt gets his throat cut by Bob.

Even editing it was a pain in the ass, because we swore way too much, and since this was for a school event, we had to edit out all the naughty fuck words, and we even had to edit the cut-throat scene because it was "too graphic". I mean, it was cheap as shit, considering all we used for blood was ketchup at the time, and you can see Wyatt smiling when he dies in the film, but the ninny's at Shepherd Hill just couldn't handle it. The swears were replaced with duck quacks, and the bloody stuff was cut out. Oddly enough, they kept the scene in the preview they were showing in the hallway leading into the auditorium, so have no idea what was going on... My first taste of the fucked practices behind the MPAA? Definitely felt like it. The whole experience was a blast though. Just seeing something we created together as a group of friends on the big screen felt great. Tics came in second place, and then Lindsey put the full version up on Youtube soon after. This is where is starts to get fucky, because it would be years before I would ever see Tics again, up until a few months ago. 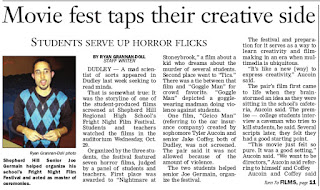 So, in the original version of Tics, we featured two songs. One from Linkin Park, and the other from Shadows Fall. Back in 2008, Youtube didn't give a shit about copyright, and you could literally post anything with whatever music you wanted. If the artist was pissed off about you using their music, they would contact you directly. Now it's 2018, and if you even feature a 5 second long clip of some popular song, your video gets hit with a copyright violation. I don't disagree with this, but this is what made it hard to get and watch Tics again. It was an on and off situation. Sometimes it worked, sometimes it didn't, but there was a time where the video was outright banned from being watched at all. You can actually find sites and other proxy's that will let you watch certain videos in other countries, but this was fucking gone. I tried emailing youtube to see if I could get it back, but there was nothing they could do, and it's been nearly a decade since Lindsey has touched her youtube channel. I was going to take the loss, but one day Youtube put its guard down, and I was able to watch it through a proxy server. If I was going to get it back, it was going to be now, because I had no idea when this was going to get lost again. I needed it back.

Thanks to a few "legal" programs I found online, I was able to rip the movie off of youtube. The only problem is that it would only capture the video, and no audio. I could listen to the audio fine, but it took me awhile to figure out what I should do. I took the harder route, because I was left with no options. I ripped the video, and then I replayed the video through the proxy and captured the audio through my phone. I then uploaded the audio from my phone to my computer, tossed the audio and video into iMovie, and then edited the audio to match the video. I took out the music and replaced it with free generic horror music from the web, and I cut down a scene where Wyatt is walking around for 2 minutes. It was an epic pain in the dick, but it was so worth it. I was able to save Tics from being lost, and it's the oldest piece of media I can find that I've created. There were others, but those will be lost forever. After the revival of Tics, I went on a quest to find more old shorts I made, diving deep into a rabbit-hole of nostalgic goodies. You can find most of them in a "Shorts Compilation" article I posted here, and I'll link it below.

Several months ago, Bob and I were chatting about old memories, and he came up with the idea of re-making Tics. I've been getting the filmmaking itch, and its been over a year since I've made a short. I started to come up with ideas and for the past few months I've been working on a script. When it came down to doing a remake of something we made in High School, I knew I had to go all out. I needed to flesh it out completely, add more characters, drama, and turn up the violence all the way to 11. My vision for Tics is more-so a psychological psychedelic splatter fest. I want it to be visceral, bleak, and since this version is all based around mental health, I want it to be a severe punch to the gut. As of now, the script is almost complete. I just need to do some fine tuning, come up with designs for effects, and figure out how I'm going to pay for all of this. I want to go balls out for this, and at the ripe age of 28, I don't have time to fuck around with a shit product. When I make this movie, I'm going to put my all into this, and I want to make it the best goddamn thing I ever made.

I'll keep you posted on updates as far as the making of Tics goes. Besides the actual movie, I have plans to make a "Making Of" documentary, and a couple other small clips from Youtube. Not sure when I'm going to be able to film, but I'm gearing for a spring of 2020 release. It's going to be brutal, but it's going to be a fucking blast too.

Related Article: A Compilation of Shorts I've worked On

Basses of Death: A Brief Look into my Short Discography 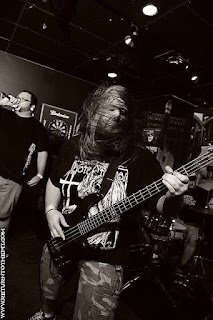 It's been about 7 years since I last played a gig, and close to 4 year since I've recorded anything. Life throws you curveballs, and it's a damn shame when those curveballs keep you from slamming around on stage with your buds. I still play and practice constantly, but there's truly nothing like being on stage, and ripping through uber fast and severely brutal tunes. It's an incredibly feeling. Even just practicing with a bunch of dudes and writing new material was a blast. The nostalgia of it all has been punching me in the face, especially when you have things like Facebook, and all it does is remind you of all of the awesome shit you did nearly a decade ago. Lately, it's been getting out of control, considering Naegleria's been broken up for 7 years, and every time I log on to social media, I'm hit with old live action shots, flyers, and videos of all of us doing what we loved best... play death metal. I figured this would be a pretty fun time to introduce some of you folks to a couple of the EP's I played bass on, and to discuss the great memories behind making these pieces of music. 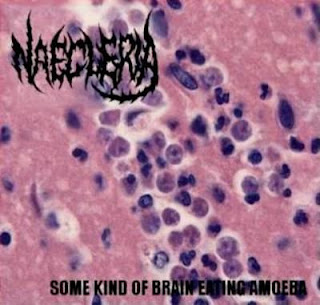 I was in a couple "bands" in high school, but it was pretty hard to find people motivated enough to play really heavy metal. When I was 13 or 14 I really started getting into death metal. Of course I started with the O.G.'s such as Cannibal Corpse, Deicide, Immolation, Death, and Suffocation, but my taste in this stuff just kept getting heavier, and nastier. In comes Rayne, who was the older brother of one of my closest buds, and in 2008, he had just formed an early incarnation of Naegleria with drummer Matt Clark. We all worked at the same restaurant, and after a couple months of prodding and figuring out what I'm into, he asked if I would be interested in playing bass for his band. I'm not going to go deep into a detailed history of the band, but I thought it was a pretty decent origin story.

Naegleria would eventually become a five piece consisting of Joel Krantz on vocals, Rayne Purcell on guitars/vocals, Tom Caron on guitars, Myself on bass, and Matt Clark on drums. With 4 years and a few dozen shows under our belt, it was a wild fucking ride, and I mean fucking WILD. The band would eventually come to an end in 2012. I've been asked by Joel several times to upload the entire EP onto youtube, so today, I said fuck it, and finally did it. Check it out, give it a listen, and let me know what you think. 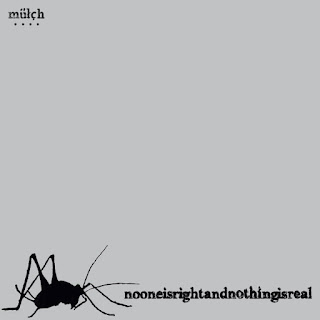 5 years later, "Mulch" was formed. I wasn't the first bassist for the band, but due to the original bassist not working out, I was asked to play bass. I was joined again by Rayne on guitar, Mike Jacques on vocals, and we had a fictional member of the band who went by J. Quinn. It was definitely more a studio thing than anything else, cause well... we never played a show. It was discussed a couple times, but it was pretty cool enough just writing and recording some music. Mulch was a pretty weird band. It was a mix between super fast grind mixed with slower post-metal type of stuff. I got to experiment a lot with the bass lines, which was a first for me. When it came down to playing bass on the Naegleria EP, I pretty much played along with the guitar, kind of adding the technical aspect to metal bass playing. With Mulch, however, it was fast and brutal, but with some of the soundscapes Rayne came up with, I added weird, melodic bass-lines over it to make it sound insane. It was a very fun process, making those songs, and I'm surprised we haven't done anything else with it. The whole EP is on youtube and soundcloud, so I'll link them down below!

I don't think I'm never not going to be in a band or record something again, but in the mean time I'm just going to keep on writing, and pondering on the good times I had slamming on stage and recording music with my buds. 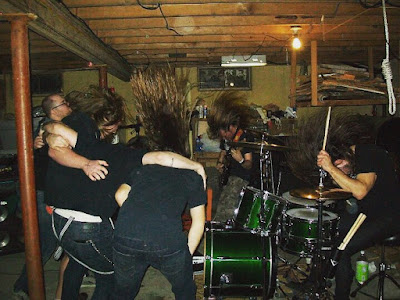 Naegleria and others playing a basement show with Obsidian Tongue and Betrayed by Prophecy after getting kicked out of a VFW
Posted by Jake at 10:43 PM No comments: