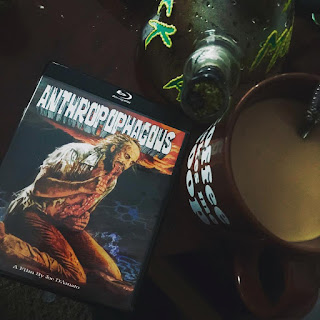 You know... Severin Films is one hell of a company. Over the past year, I've purchased several of their movies, and I have yet to be disappointed. The quality of the transfers blow me away, considering a bunch of these films have been gathering dust in some storage box somewhere. Anthropophagus is an incredible example of the work that the guys at Severin put in making these films look incredible. I remember seeing this movie as a teen, in the shittiest quality on a cracked vhs tape. It was awful. I couldn't make anything out half the time, and everything was so dark. I guess I should note that this was most likely a bootleg, and I apologize on behalf of my high school buddy for having such a horrible fucking transfer. When I found out that Severin was releasing this on blu-ray, I had to get it... but I didn't. It was Christmas time, and I didn't have too much money to spend on myself, so I slept on the awesome sales that were going on at the Severin website. Here's where my awesome girlfriend comes into the picture. We generally ask each other what we want, cause it's much easier, so when she asked me, I immediately told her about Anthropophagus (and another Joe D'Amato flick, Beyond the DArkness.) How fucking cool is she? Thanks to her, I got one of the most notorious Video Nasties to ever grace the world. I figured I'd add a little personal touch to this blog, cause you know... it's a BLOG. Anyway, on with the review.

Anthropophagus is an Italian splatter film directed by Joe D'Amato and written by Joe with George Eastman (who also plays the cannibal in this film.) Zombi 2 actress Tisa Farrow stars in this film, alongside The New York Ripper's Zora Kerova, and George, who's also written and starred in Sesso Nero, and Porno Holocaust, which were also directed by Joe D'Amato. The film follows a group of tourists who take a trip to a remote off the coast of Greece, only to find that the town has been deserted, or so they thought at first. They happen to see a women in one of the buildings, but before they could reach her she disappears and leave's a note saying "go away". They soon run back to the boat, only to find it out at sea, without anyway of reaching it. As they go back into town, Tisa Farrow's character recognizes a house where one of her friends live in. When they search the house, they find one of the daughters in hysterics and waving a knife around. After this girl, who we then find out is blind, calms down, she goes into a panic about a supposed mad-man running around the island. After some of the tourists go out to find supplies and more people, they start to get picked off one by one in the most gruesome ways imaginable.

When I say gruesome, I mean fucking g-r-u-e-s-o-m-e. There's one scene, where one of the tourists, who's pregnant, is strangled, and her fetus ripped out an eaten by the Cannibal stalking the island. The gore is gross and slimy, making any gorehound like myself go "YUCK" with a big grin on their face. The story is very interesting too, and I don't want to spoil too much, but when the tourists begin to discover the secrets behind the island and the cannibal, it's so satisfying. I've seen a bunch of these Italian splatter films, and they're fun and all, but they lack a solid plot sometimes. Anthropophagus adds such a intense thriller aspect to the film, that makes it interesting, and the gore is just frosting on the cake to an already creepy and unsettling horror film. That's what I really loved about this movie. It has an unsettling vibe from the beginning, with a desolate village and a maniacal killer stalking the streets, looking for anyone to savagely dispatch and consume. George Eastman as the cannibal has got to be one of the most disturbing villains to ever be put in an Italian splatter film. That ending alone is still etched in my brain, and it's just so fucking iconic. You might know what I already mean, especially if you're into these kind of films, but I won't ruin it for those who want to see this.

If you'd like to see Anthropophagus, purchase it at SEVERIN-FILMS.COM! You truly won't be disappointed. Check out the trailer below and let me know what you think! Also, if you have any suggestions to what I should check out next, shoot me an email at: jakethegoreguy@gmail.com