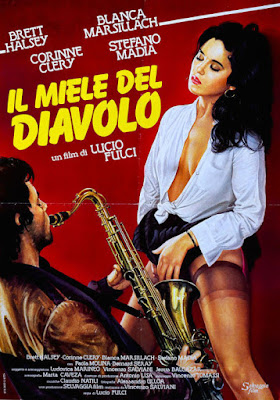 The Devil's Honey, written and directed by the "Godfather of Gore" himself, Lucio Fulci. Although, this movie wasn't the "normal" Fulci film that I'm used to, considering it didn't have... well, gore! That's not an issue with The Devil's Honey though, because I honestly found this completely interesting, and it's probably the most emotionally complex of all the Fulci films I have ever seen. Yes, I bought it cause it was advertised as "sleazy eurotrash", but I felt it went above and beyond, truly showcasing Fulci's film-making versatility when it came to the erotic thriller genre. I feel that the Devil's Honey is a deep, and brutal film about dealing with abuse, remorse, and revenge... and I'll explain (of course this is all my opinion, and I mean, what do I know, Fulci could of just been going for the sleaze-fest that it was advertised as.)

The film's main characters, Johnny and Jessica, are absolutely in love, or I guess, in lust with each other. Johnny is a sax player, and a perverted sex maniac. Every time Johnny and Jessica have a moment alone, they just begin fucking, and taking part in other sexual acts. Probably the most famous scene in the movie is when Johnny gets Jessica off by playing a sax solo directly into her pussy. It's insanely erotic, but a lot of that lovey dovey stuff takes a dark turn, and that's when we begin to see the perverse side of Johnny. He was sexually abusive, making Jessica do things that she didn't want to do such as record home videos, and there's even a nasty scene involving forced sodomy. During this brutal affair, we are introduced to Dr. Simpson, a surgeon who is in a crap marriage, and spends most of his time either banging hookers, or focusing on his work. Between the wretched romance between Johnny and Jessica, mixed with the manic adulterer Dr. Simpson, The Devil's Honey takes a brutal turn for the worse. 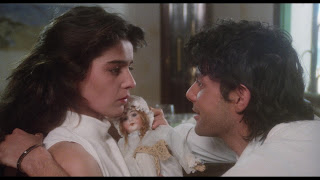 During a motorcycle ride with Johnny, Jessica is forced to play with his ding-dong while he rides. As soon as they get back to their place, Johnny begins to fool around on his bike, teasing Jessica. One bad turn and Johnny falls off the bike and strikes his head on a rock. All is well at first, but then he passes out at a recording session, and is rushed to the hospital. While this was going on, Dr. Simpson's wife tells him that she wants a divorce, and this absolutely throws off the doctor. This is when we find out that Dr. Simpson is the one who's going to operate on Johnny, but due to the stress of the soon-to-be divorce, he fucks up, and accidentally kills Johnny. Overcome with grief, Jessica vows to get revenge on the doctor that took her love's life. This is where the film gets very interesting in my opinion, because this is where we get to see the inner thoughts and confusion with Jessica, and her battle between revenge, and dealing with the trauma of her relationship with Johnny.

So Jessica eventually kidnaps Dr. Simpson, and ties him up at her house. It's quite a vicious display, with Jessica making the doctor eat dog food, whipping him, and teasing him with her body, as she is basically naked throughout these torture sequences. Meanwhile, she keeps looking back to her relationship with Johnny, and slowly realizes how cruel and perverted he truly was to her. This was my favorite part, because I think she was really able to get over the pain that she built up over the years being with Johnny, and coming to the realization that this revenge plot wouldn't of done a damn thing anyway. An interesting thing about the Doctor is that he kind of begins to fall for his captor, and really sympathizes with her. Eventually, both of these tortured souls embrace each other, and the film ends of sort of a good note. i mean, that's what i got out of it. 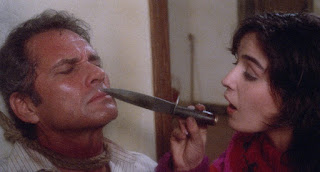 The Devil's Honey was just great. It was beautifully shot, and that's one thing that I've been noticing with a bunch of Fulci's less splattery works. The story won me over, as it was emotionally complex, and Jessica was just the most sympathetic character in any movie I've seen in awhile. I honestly felt for the girl, and I think this movie tastefully showcased the horrors of a toxic relationship, and the grief involved with someone living with sexual PTSD or what have you. One man's sleaze, is another man's deep emotionally driven thriller. I loved it, and I am definitely going to watch it again. This is the perfect movie for a Fulci fan who is unaware of his less gory works. You can actually get this movie in gorgeous HD thanks to Severin Films, so pick up the blu-ray, watch it, and let me know what you think!