A Compilation of Shorts I've Worked On

One of my goals in life is to make my very own full length horror film. I write constantly, but mostly due to financial reasons, and I guess having no real movie-making experience, I haven't been able to really make one. Obviously it's hard, but you can still create entertaining stuff with very little, or no money. This is what this compilation is... a bunch of shorts I worked on, all of which I couldn't have done with out my buddy Tyler Aucoin. I'll provide a bit of commentary to these and I'll go from oldest to newest, but other than that, sit and enjoy.

So Ty and I have been making shorts since High School, and looking back, we should have at least a dozen of them uploaded. Sadly, a lot were lost over the years, and most of the ones I'm mentioning below were made within the past 4+ years. A friend of ours, Steve, had a ton of his shorts online. Some featuring myself, and a ton featuring Ty, but sadly, he took them all down a few years ago, and those would of been great to add. Luckily, I do have a very old one to share. Starting out this segment, TICS (2008) 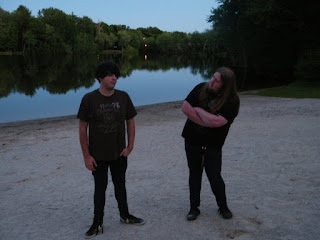 Ty and Jake circa 2010
TICS (2008)
TICS is a short horror film Directed by Lindsey Marble (Brodeur). It was made for a horror film festival that Ty and I put on at our high school, and featured Bob Brodeur, as the killer, and the victims played by Wyatt Adams, Ty, and myself. This was filmed in an abandoned mill in the woods behind St. Andrew Bobola Church in Dudley, MA. I love how silly this is, and it's crazy to think that it's been ten years since this was made. The Mill was always a great go to for filming locations, but sadly it was demolished back in 2012.
S.U.N. (2013)
With boredom, comes art... and nonsense. I think the basic plot to this was "what if the Sun gave off radioactive waves that turned people into bloodthirsty psychopaths?" This was back when Ty and I went by the moniker "Red Mist Productions", and this is the only video on the defunct Youtube channel. Wondering why I added this? Well, some work was put into it. Mostly the sound design thanks to Ty.
Offering (2015)
Again, with boredom, comes art. Just like S.U.N., this was completely made up on the spot, but I was pretty impressed with the end result. This was filmed in Ty's backyard in Dudley, MA. I think this was around the same time I started watching some weird art films. Mix that with a bunch of pot, and we come up with this sacrifice sequence. Zero budget film-making at its finest. Also, around the 38 second mark, you can see the shadow of my arms, camera, and tripod right in the center of the shot. Hilarious.
Evil Dank (aka, the head crush test) (2016)
So this short was made to test out a head crush special effect we wanted to use in THE MASS MURDER. Thanks to my small collection of "Make Your Own Damn" Troma books by the great Lloyd Kaufman, I figured out how to make the cheap effect. A cantaloupe, a wig, and blood. That's it. It wasn't intended to be shown at the premiere of THE MASS MURDER, but some people thought it was funny and it was shown after our main feature.
The Mass Murder (2016)
I guess you can say this was our first "serious" short. Ty wrote the script based around guy who lost his mind and murdered a bunch of people inside of the old Hewitt Restaurant in Sturbridge, MA, and it was directed by an acquaintance of ours, Chris Latour. It was the first time we had a crew, with lighting, decent cameras, and a solid location, but this said crew wasn't too knowledgeable about making horror films. It was filmed on location at an abandoned Days Inn, and it was perfect. It was also the first time I only acted in something, and I'm not the biggest fan of being in front of the camera. I do have a few issues with the film, but all in all, it was a fun experience. About a month later we showed this film to a group of people at Starlite in Southbridge, and got a bunch of laughs (Mostly due to Ty's head exploding). The film wasn't intended to be funny, but a laugh is better than a "BOOOOOOO".
Analog Undead (2017)
So back in December of 2016, I was laid off from my job. Being the kind of guy I am I was going absolutely fucking nuts doing nothing in-between my job seach, so I figured I would try and make a short movie. Analog Undead was written on the fly, but it was left unfinished when I found a new job. I did everything on this, and it's the first time I made a movie without Ty, or anyone for that matter. I think it still has a lot of potential, and I did write much more to it. I even made fingers for a scene in which the possessed VCR bites them off. Who knows, I may bring this project back from the dead when I get a bit of a budget going.
Endless Way (2017)
Endless Way is a short film written by Ty, and it's about a young man battling his inner demons and addiction to opiates. We both have had friends and family who have gone through addiction, and Ty came up with this idea for a PSA disguised as a horror short. I find it pretty impressive, and I'm quite proud of the cinematography and sound design. It was also the first time I filmed with my Iphone 7s and the quality was superb. The Old Man is played by Ty's dad, and this was filmed on location at Westville Park in Sturbridge, MA.
Garden of Evil (2017)
Garden of Evil has been something Ty has been talking about since the 10th grade, and obviously a passion project of his. One day we just figured we would make an extremely short version of it for shits and giggles, and I think it came out pretty well. The original story is hell of a lot more fleshed out, but with no money or other people, this is what we came up with. Ty's dad comes back to get whacked by a lawnmower, and hilarity ensues. I really want to go back to this one, and hopefully turn this into a feature length movie.

And there you have it. Like I said, a lot has been lost over the years, and even finding TICS was a surprise considering how old it is. It just blows my mind, thinking about how far back all of this has gone, including my long friendship with Ty. Hopefully someone more stuff pops up, but I'm pretty content with the material we have made over the years. There will be more to come in the near future, and they will just keep getting better and better. Let me know what you think, and enjoy! 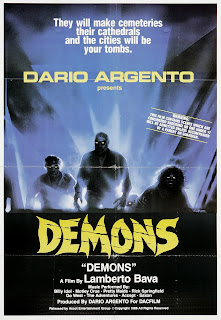 What do you get when you combine the deranged minds of Lamberto Bava and Dario Argento? A stunningly insane splatter flick with demented demons and a kick ass metal soundtrack! For me, this movie the the pinnacle of 80's splatter, with it's outrageous gore effects, memorable characters, solid but simple story, and a list of metal tunes you can bang your head to while you watch a theater of people getting ripped apart my demons. But let's dive deep into the Bava directed, Argento produced splatter shocker that still has folks squirming with gore-soaked glee. This is DEMONS.

After having the shit scared out of her, and mistaking a masked weirdo handing out tickets for some deranged stalker, Cheryl accepts the ticket offer and meets up with her friend, Kathy. It takes a little convincing, but Cheryl gets her friend to go to this new theater that just opened up. Once in the theater, we are introduced to a huge array of characters. Some of the notable ones include two preppy dudes, George and Ken, who immediately begin hitting on Cheryl and Kathy. There's a blind guy and his daughter, who I always thought was his wife for some reason, a couple of the geekiest but innocent teens out on a date, and my favorite, the pimp and his two hookers. In the lobby of the theater is this samurai warrior riding a dirt bike, holding a sword, and a silver mask. One of the hookers puts the mask on, but gets scratched by it. Once everyone enters the theater, they are treated to a horror film about a group of teens breaking into the tomb of Nostradamus. The teens in the movie only find a book, and a mask that looks exactly like the one in the lobby. At the same time, the hooker who got scratched by the mask starts to get sick, and goes to the bathroom. This is when shit starts to go down.

The scratch on her face begins to puss and ooze, and she begins to transform into a heinous demon. The other hooker goes to the bathroom to see if she is okay, but she is attacked and thrown through the movie screen. Hooker number two begins to transform, and holy fuck it's gross. When I say gross, I mean that in the best way possible. The transformation scenes are so disgustingly brilliant, that even I was squirming in enjoyment. The hookers teeth begin to be pushed out by the new fangs replacing them, and if you're like me, anything with teeth really freaks me out. Teeth and fucking nails, can't stand it. One by one, the audience is either butchered and maimed by the infected, or they become Demons themselves. Even the theater is cursed, with all of the entrances being walled up by bricks, and no one is able to exit. It isn't until a bunch of coked up punks break into the theater to escape the police, which they soon meet their demise by the Demons, and then said Demons escaping into the city, causing more havoc.

This movie is just berserk, and I'd give you more but I really don't want to spoil anything besides the basic premise. It's just that enjoyable. DEMONS is an unrelenting splatter movie that keeps your eyes glued to the screen from beginning to end. Whether you think the story of movie-goers being stuck in a cursed theater, and getting killed by hoards of demons is corny, it's full of incredible special effects and camera-work to keep you fixed into a daze of pure blood lust. Grab a group of friends, get a bunch of snacks, and pop in a copy of DEMONS. You won't regret it, and if you're like me, DEMONS will be part of every marathon you have in the future. I have the uncut version that Anchor Bay put out over a decade ago, but this has been re-released a bunch of times since then, and I don't think you would have an issue finding it. Let me know what you think, and enjoy!