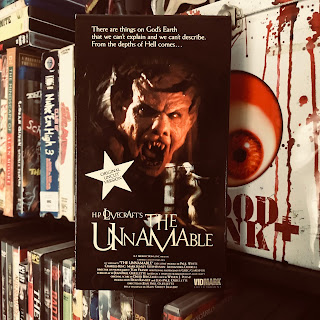 I figured since I was going to revamp this blog, I would add some weekly and recurring segments to spruce it up a bit. Here comes VHS//Sunday, an article dedicated to those who want to relax with a good tape. It's always been a ritual of mine. I would make myself a coffee, pack myself a bowl, and pick out a few tapes to watch. It can range from some obscure horror film to old nostalgic cartoons, but since this is primarily a horror and exploitation blog, I'll stick with the gruesome shit in my collection. And for this blogs first VHS//Sunday post, I wanted to watch the obscure horror classic THE UNNAMABLE, based on the 1925 short story by H.P. Lovecraft.

I'm a sucker for anything related H.P. Lovecraft. Whether it's based on his work, or influenced by, there are a handful of films based on his work that I just absolutely enjoy (Re-Animator/From Beyond comes to mind.) But The Unnamable is one that has eluded me for some time. Luckily, a few months ago, I found The Unnamable at the Dudley Flea Market and payed just a buck for it. Just a few weeks after that, that same flea market closed due to pipes exploding and destroying everything inside. I was lucky as fuck to have found it, because I guess it's fairly hard to find. After I moved into my new apartment, I finally took the time to go through, and watch a bunch of tapes that I've been neglecting. The Unnamable was the first to catch my eye, amidst the stacks of old VHS I've been collecting for years. I got prepped with my pipe and snacks, tossed it in the VCR, and hit play.

The Unnamable is a 1988 horror film written, produced, and directed by Jean-Paul Ouellette. The VHS I have is the VIDMARK original uncut version, which I saw on Ebay for about $20 to $30. I was lucky considering I spent a measly $1 on it, and the quality of the film and box is superb. The film is essentially a haunted house movie, with the basis of the original Lovecraft story being about two college men going into an old and cursed house in a cemetery, and being attacked by some indescribable beast. Of course with all film adaptations, the filmmakers are going to change a few things. Take the haunted house story, and add a few teenagers, blood, and some great creature effects, and you have Jean-Paul Ouellette's version of The Unnamable.

The Unnamable begins in the old Winthrop house, where Joshua Winthrop tries to calm this screaming creature that he keeps locked up one of the rooms. He fails, as he's brutally murdered by the creature. Skip to about 300 years later, and we have three men sitting in a cemetery talking about The Unnamable, an entity that haunts the old Winthrop house near Miskatonic University (sound familiar?) Randolph Carter, who in the Lovecraft mythos is mentioned a few times, gets his friends going about this supposed creature named The Unnamable. His friend Joel is eager to go into the house. When Randolph and their other friend Howard refuse to go into the house, Joel sets off on his own. After Joel doesn't come back for some time, Randolph and Howard go back to the Winthrop house to find him. Add a small love triangle and a couple more teenagers who want to bang inside the house, and now you got the making for a monster-slasher movie.

This was honestly a very fun movie. The acting was very good, especially Mark Kinsey Stephenson who portrays Randolph Carter. It has that bleak Lovecraft gothic atmosphere and the sets are very solid. I also wasn't expecting it to have lots of blood and gore, so it was a surprise to see people get their throats ripped out, beheaded, and heads smashed open. The special effects were pretty remarkable, especially when it came to the monster suit, and I have give the actress Katrin Alexandre a lot of credit for her incredible portrayal as the monster. The Unnamable is a great watch, and I'm surprised that many people are unaware of it's existence. It's a solid horror film with a great cast, and a lot of great gory gags. I highly recommend this to anyone who can find it, or if you wait a little bit, you can find it soon on Blu-ray when Unearthed Films releases it in October! I'll post the links and trailer below, and let me know what you think!

UNEARTHED FILMS
Posted by Jake at 9:08 AM