It's always fun to go through the horror groups on Facebook, or find small indie horror forums, just to find the one person that references the horribly underrated mockumentary BRUTAL MASSACRE. Whenever I mention it to other friends and cult movie goers, 95% of them have no idea what I'm talking about. It just blows my mind that a lot of people are unaware of this movie, and I'm writing this because I want more people to check it out. Honestly, it's got to be one of my favorite comedies ever made, so here's a completely biased review of BRUTAL MASSACRE: A COMEDY. 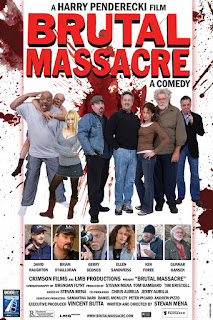 BRUTAL MASSACRE was released in 2007, written and directed by Stevan Mena. You may know Stevan from his other work such as Malevolence and Bereavement, two solid slasher films that, if you haven't already, should watch. But I'm not talking about his horror films, I'm talking about his comedy about a horror filmmaker trying to make his next big film. This movie stars David Naughton (An American Werewolf in London) as Harry Penderecki, a horror filmmaker struggling to create his new "masterpiece" after years of failure, and his film crew which consists of one of the best cast lineups in any cult movie. Brian O'Halloran (Clerks), Gunnar Hansen (The Texas Chainsaw Massacre), Ellen Sandweiss (Evil Dead), Betsy Baker (also Evil Dead), Ken Foree (Dawn of the Dead), and Gerry Bednob (The 40 Year Old Virgin). The movie has horror film nostalgia all over it, and that's where most of the comedy comes from in this. If anyone has ever made a short film, or a full on low budget feature length film, you already know all of the bullshit that goes into making a movie. BRUTAL MASSACRE is essentially breaking down ever aspect of the film-making process, well, as if every bit of the making of this movie was doomed from the start. Everything from pitching the film to some rich asshole who wants to change every bit on the script, to casting, pre-production, inexperienced special effect techs, etc etc. Anything that could go wrong on a film set, happens in BRUTAL MASSACRE, and it is hilarious from beginning to finish.

Fangoria Magazine refers to this movie as "The Spinal Tap of horror films", and that's essentially it. The offbeat humor and dry delivery of the dialogue is what makes this movie so great. David Naughton is just so awkward and goofy, and just completely unaware of his surroundings. Every time he takes one step forward, his film and crew take five steps back, and he spends most of the movie trying to round up his crew without committing suicide in the process. Other than David Naughton's portrayal of Harry Penderecki, Gunnar Hansen as the drunken Vietnam vet was the funniest character in the movie. He has some of the best one liners I have ever heard, and I quote them all the time. Even the other day my girlfriend was asking me to go to the store to get some things, and we joke around a lot so she was pretending to be a major asshole. That's when I yelled "I WAS IN THE NAM, PUSSYFART. I'LL TWIST YOUR HEAD OFF AND GO BOWLING". She didn't know what to say, and I was just cracking up... I mean as all 26 year old man-children would after yelling "PUSSYFART". 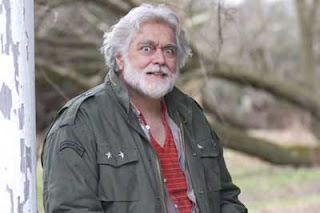 I understand that most people wouldn't get the humor or the film-making process, especially when all of the inside jokes refer to horror films, but BRUTAL MASSACRE even seems to be underrated in the horror community, and I don't get it. You'd think with a cast like this, and a story as funny as a low budget film-making crew making a ridiculous movie, would appeal to the typical horror nerd. Of course, like I mentioned, this is completely biased. I saw this movie when I was in high school and it just stuck with me. I personally find it hilarious, and as someone who has made a few short films, I just got it. I think it's just one of those niche films, where you really got to be into horror culture and film-making to really get it. Maybe you don't either, and you like off-beat, dry humor. I've read a bunch of negative and positive reviews, and usually it's directed towards the humor aspect or the self-deprecating of the indie film-making process, so I can see it as a movie that you either like or dislike. But, I'm one of the guys who loves it. I'm a nerd who's into making movies, and that kind of humor, so whenever I interact with other horror fans I always like to reference BRUTAL MASSACRE to see if they know what I'm talking about. I'm a fan, what can I say.

I know you can find this movie cheap on amazon and other streaming/rental websites, so if you have the couple extra bucks to blow on a movie, definitely pick up BRUTAL MASSACRE. I think it's just a great movie for the typical horror nerd, or the aspiring film-maker, or someone who just enjoys a good comedy. I'll post the amazon link and trailer below, and if you purchase it, let me know what you think! I'm always wondering how all of you react to the movies I like to write about, and if you want to chat and discuss more movies, you can always follow me on twitter or instagram as @jakeisrepugnant. Hope you enjoyed this completely biased, ultra-fan review of BRUTAL MASSACRE, and I hope to hear form you soon. Thanks! 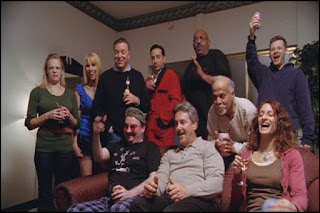 BUY BRUTAL MASSACRE
Posted by Jake at 9:12 AM