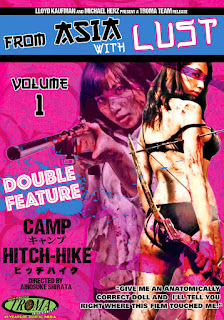 Directed and Produced by Ainosuke Shibata

"Camp" is a Japanese "rape and revenge" thriller (a la I Spit On Your Grave) directed by Ainosuke Shibata. The film is about two sisters who wind up at an abandoned camp-site after they crash their car. At the camp, they run into five men who happen to be escaped mental patients who have uncontrollable sexual fetishes. They all go by small nicknames that link them to their particular fetish. There is Pyro (pyrophiliac), a psycho who can't get it up so he rapes women with a grill lighter; Hypo (hypoxiphilia), a retard who gets off at depriving his victims of oxygen; Necro (necrophilia), who only has sex with corpses (duh); Copro (coprophilia), a very silly weirdo who loves to drink piss and eat shit; Lastly, we have Thanatos (thanatophilia), the more sympathetic character who is obsessed with pain and death. Our two victims are tortured mercilessly by these men in incredibly sadistic and depraved ways, and it isn't until one of the sisters escapes (with the help of Thanatos), and finds help in murdering these psychos from the help of the mysterious vigilante Misaki (played by porn-star Miyuki Yokoyama, who ironically has no nude/sex scenes). 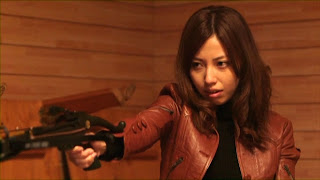 I was surprised. It wasn't that bad, at all. The torture and rape was brutal and hard to watch at times, and the ending revenge towards the sickos was pretty fun to watch. There were a couple digital effects in there that looked way out of place, but it's a low-budget feature that nailed everything else. Decent acting, fun violence, beautiful women, and fucked up villains. If those aren't the ingredients to a fucked up Japanese sexploitation flick, then I don't know what. If you want to check this film out I'll link the Troma store to this flick down below. I'm sure it's on youtube for free somewhere, but you'd be a great fucking person by buying it and supporting independent art. I'll get around to the other film on the Dvd, Hitch-Hike, eventually, but I got a lot of great stuff to watch in my endless stack of movies. Let me know what you think, and send me some suggestions!