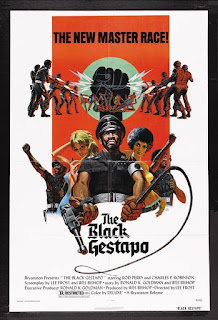 Written and Directed by Lee Frost

Written and directed by Lee Frost, The Black Gestapo is a Blaxploitation film about The People's Army and its struggle to regain power in the city of Watts. A White mafia terrorizes the city by extorting money out of local Black shop keeps and business owners, and The Peoples Army, led by General Ahmed (Rod Perry), try their best to keep things civil in their hellhole of a city. General Ahmed's right hand man, Colonel Kojah (Charles Robinson), asks his leader to form a more aggressive protection group to scare away the White Mafia. It works, but Colonel Kojah gets power hungry, and starts tormenting and extorting the people he once protected. With Nazi-inspired clothing, and hateful rhetoric, Colonel Kojah is now the big boss in Watts, and it's up to General Ahmed to fix both his oppressed community, and the originally peaceful People's Army that he once led.

I bought this film just by title alone. Kind of a social oxymoron, don't you think? Black. Gestapo. Normally, black people are the last thing I think of when I think of "Gestapo" or Nazi's, but it definitely plays out that way. I mean, these people didn't really kill anyone based on race or religion, but they did terrorize a city that they vowed to protect, and terrorized their own people to gain more power within. The only real similarity to anything Nazi in this film were the costumes. Typical Nazi uniform with arm bands and such, but other than that, I wouldn't really call them "Black Nazi's", but fascist to a degree. I really enjoyed the character General Ahmed. He was a real middle man in this whole story. He not only wanted to protect his people from this wretched mafia, but he also wanted everyone to get along, and to keep drugs off of the streets. With Colonel Kojah abusing his own people, General Ahmed stood up for what's right to keep things civil, both for the city of Watts, and his fellow oppressed African brothers.

The Black Gestapo was a pretty entertaining flick. Lately I've been looking for more obscure Blaxploitation, and a few people suggested this to me on Twitter. Found it on Amazon (came is as a Double-Feature with The Black Six) for about $5, and even though the quality kind of sucks, it was still a very decent watch. It's cheap, and incredibly low-budget, but it worked so well. The actors were fun, the violence was great, and the whole "abuse of power" story going on was very interesting. The People's Army may not have been as brutal as the Nazi's, but I wouldn't want to fuck with them anytime soon. Colonel Kojah was absolutely ruthless, and if you're sensitive about genital mutilations or torture, there is a scene in here that you might want to skip. Low budget, blaxploitation greatness that more people need to check out. I'll post a trailer and link below, so if you're interested, check it out, and if you've seen it, let me know what you think. Enjoy!

BUY THE BLACK GESTAPO ON AMAZON