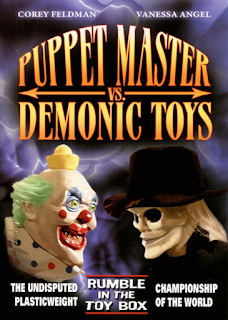 I'm actually surprised I haven't written an article about the Puppet Master films yet, but given Christmas and personal nostalgia for the holidays, Puppet Master vs Demonic Toys instantly came to mind. PMvsDT is considered the worst Puppet Master movie in its long line of films. I don't disagree with that, because it is pretty bad, but for me, it's one of those films that fall into the "so bad it's good" genre. I also have history with the film, and every time the holiday season comes around, I think of this movie. 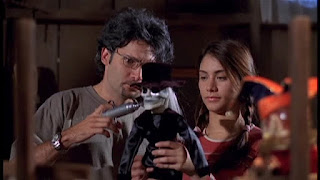 December 18th, 2004: The SciFi channel premiered Puppet Master vs Demonic Toys, a very silly Christmas horror film brought to you by none other than Charles Band, and his film company Full Moon Entertainment. I remember staying up late to watch it. The Puppet Master franchise is one of my favorites, and with Christmas around the corner, there was no way I was going to miss this. PMvsDT stars Corey Feldman as Robert Toulon, the great nephew of Andre Toulon. Robert, and his daughter, played by Danielle Keaton, revive the Puppets after they figure out Andre's old formula. A giant corporate toy company then wants to steal the formula, and with the Demonic Toys help, will unleash killer toys to all the children of the world on Christmas Day. The plot is incredibly similar to Halloween 3, but not executed all that well. The acting is completely wretched, especially Corey Feldman playing an older guy with incredibly fake grey hair. Nothing is as horrible as the actress who plays his daughter though. Where Corey Feldman over acts, or, over reacts in every scene he's in; She under acts, and doesn't react to anything. There's a scene in the movie I laugh at every time where his daughter sees that his lab on fire, and she lets out this monotone "Oh No" before extinguishing the fire. I'd honestly have wild and goofy acting in my films than stale, wooden acting. The special effects are really bad too. The movements on the Puppets were very jerky and stiff. It was almost as if the they just tied wires to the hands and head and twisted them around. Another hilarious bit of the film, is when the Puppets are given cyborg make overs. They look like little micro-budget Terminator villains. 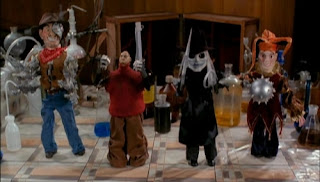 As bad as it is, I enjoy it. I always get a little grin when I see Blade, Pinhead, Jester, and Six Shooter going around and causing mayhem. Puppet Master is a childhood franchise of mine, and it holds a lot of nostalgic value. So the way I view Puppet Master vs Demonic Toys is that, it may be shitty, but it's a very entertaining bad-movie. Between Corey Feldman's over-acting, the very goofy special effects, and the over-used plot, it's a laugh fest, and it's also a Christmas movie, which adds an even bigger camp factor to this movie. It's worth a watch, and whether you like it or hate it, there are some hilariously bad moments in this. If my 13 year old self can stay up to watch this turd fest, so can you. Let me know what you think, and have a great new year! 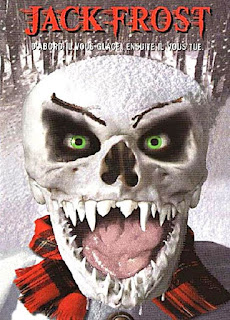 Written and Directed by Michael Cooney

I know what you're thinking... "Jack Frost? That really stupid and creepy Christmas movie starring the great Michael Keaton?". Well, there's no Michael Keaton in the feature, but it's actually a hell of a lot better than that piece of shit. Jack Frost is a Christmas slasher film that came out in 1997 (a year before the shitty kids film Jack Frost), written and directed by Michael Cooney. The movie is about serial killer Jack Frost, who turns into a murderous snow man after getting into an accident with a truck full of genetic waste. Jack Frost then sets out to kill the man who threw him in jail. For watching this for the first time, I really enjoyed it.

Jack Frost is in league with the Full Moon Feature films, and what I mean by that is Jack Frost is a cheesy, hokey low budget slasher based around something as innocent as a snowman. Much like Puppet Master, the concept is really funny, but it's actually entertaining and pretty brutal at times. There's one great kill scene in this where Jack Frost strangles an old woman with Christmas lights, shoves a glass ornament in her mouth and breaking it, and then smashing her face into a box of ornaments, with the glass pieces sticking out of her mouth and face. I thought it was great, and the film is just full of absurd and hilarious Christmas themed murders.

It's silly, campy, hokey, whatever you want to call it, BUT... it's entertaining. Jack Frost is a great holiday slasher with lots of blood and campiness to satisfy any Christmas loving horror fan, and this will be part of my holiday marathon for years to come. Another great thing about this film is the appearance of the gorgeous Shannon Elizabeth (American Pie, Jay and Silent Bob Strike Back) in one of her first acting roles. Michael Cooney also wrote and directed a sequel which I was lucky to find on VHS at a local flea market, Jack Frost 2: The Revenge of the Mutant Killer Snowman (2000). I usually do a few holiday themed reviews but it's been a little hectic due to the holidays, but I have more one in me. Stay tuned, and let me know what you think about Jack Frost! 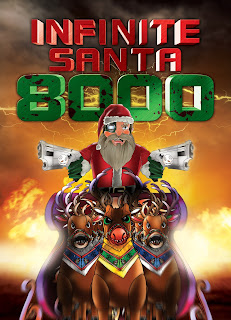 In the year 8000, Santa Clause and his sidekick Martha, must survive in a post-apocalyptic world full of mutants, cyborgs, and a giant Easter bunny. This crudely animated film ranked pretty high on my list, just for the fact that I've never seen a lot of low budget animated features before, and how could I have passed up on a movie called INFINITE SANTA 8000. For the animation nerds, the visuals might turn you away, as this kind of reminds me of the cheap cartoons you would find on Newgrounds 10 years ago, but considering the fact that this is a low budget film, I was pretty impressed with the whole thing. I know making an independent film is hard, but I couldn't imagine how hard it would be to make an animated movie at a small budget. Major kudos the the director for putting all of that time into this (No Joke, this film is about 90 minutes long).

I really enjoyed the fact that, even though Santa slaughters mutants and other baddies in this movie, he's still the innocent and caring Santa we all know and love. He's truly a charming character, and you know he's killing for good. The character designs are very fun too. The evil doctor of the film, looked truly disgusting, and the blood and gore was fun to watch. My only issue is the fact that this might have worked better as an internet series (which it originally started as). Maybe it should of been cut into 10-15 minute segments, but the dedication to make an animated feature film still astounds me, so it's just a mere suggestion on my part.

All in all, it's not a bad flick. Maybe the animation isn't the best, but I've seen much much worse, and I honestly enjoyed what I saw here. It's silly, campy, and gory enough to be enjoyable. Another great thing is that you can watch this for FREE on Frightpix, and the Kings of Horror youtube channel. How fucking cool is that? I suggest you take a look for yourself, and let me know what you think. More Repugnant Holiday specials to come!