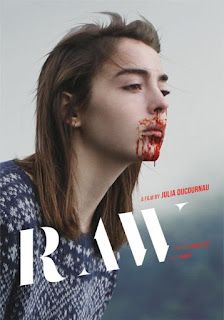 The French shocker, Raw, is one of the most talked about movies of 2016 (and released in 2017), and after I heard that people were fainting and getting medical attention after watching this, I just had to see it. Julia Ducournau's Raw is one of the craziest and most unnerving horror films I have seen in awhile. The film is about a young woman who starts her first year at a prestigious Veterinary school. After being hazed by the upper-classmen into getting covered in blood and forced to eat raw rabbit kidney, she begins to develop rashes and an intense hunger for raw meat.

This was honestly one of the best cannibal films I have seen in awhile. It's probably one of the most colorful, and well filmed horror film I've seen also. The color scheme and cinematography reminded me of films like Suspiria and The Shining; everything was just so intense and vibrant. The woman who played the lead role of Justine, Garance Marillier, was absolutely convincing. Her decline into madness and hunger chilled me to the bone, and left me with a sense of uncertainty just because you just never knew when she was going to snap. The sexual aspect of the film also made for some of the most unsettling moments in the movie. I mean, it makes sense when you think about it. There isn't really a more perverted away of killing them than trying to eat them during sex. The ending just slaps you in the face, and it's now up there as one of my favorite twists in horror movies ever. 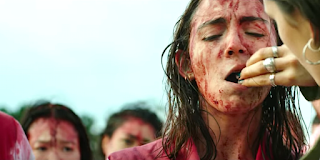 I originally watched this on Netflix, but I liked it so much I picked it up a copy at Wal-Mart. I highly recommend this, and it's honestly one of the best films to show people who are looking for something a little bit more extreme. It's the perfect blend of scary/disturbing and I think anyone who loves good horror films in general, will enjoy this one too. So go out to your local Wal-Mart, or Amazon, or whatever, and buy this cannibal shocker. Definitely a great film to watch during this festive Halloween season!