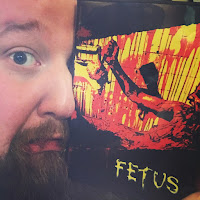 So last week I went to Rock and Shock in Worcester, Mass; The biggest horror convention in Massachusetts. I had an awesome time spending an ass load of money on things I didn't need (Rock and Shock article coming soon) but I did need some new movies. I came across one booth in particular that had a really gross looking gory corpse on the table, Morbid Vision Films. One of the movies I saw on the table was called FETUS. Fucking FETUS, and the cover has a woman ripping a torso-less FETUS (get it?) out of her snatch! I had to get the this and watch it immediately. A couple days after the con I finally sat down, and watched. I was fucking floored. 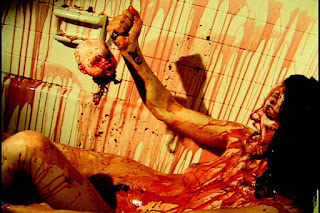 So this film is a tribute to the ultra-violent splatter movies coming out of Japan during the 80's and 90's, very much like The Guinea Pig series and Naked Blood. As far as that goes, this movie nailed it. It's one of the most brutally violent movies I have ever checked out and it is just perfectly stylized with insane amounts or gore, and glorious practical special effects. The story of FETUS revolves around a man named Kevin (played by writer, director, and special effects guy, Brian Paulin), a grieving husband still suffering after the death of his wife, and his unborn child. Kevin does everything in his power to see his wife and child again, which results him buying a book on necromancy and brutally murdering innocent people to sacrifice them to a Demon that possesses him. There were many scenes in the film that made me wince and cringe, and I loved every second of it. I haven't seen a splatter movie as fun as this one in awhile, and I'll be going around and showing this to friends every chance I get. This shocker is quite the ball kicker, and I can't wait to check out the other Morbid Vision Film I bought, called BLOOD PIGS, which Rue Morgue Magazine declared "Goriest Film of 2010".

If you're into the splatter movies like the Guinea Pig series and the August Underground trilogy, then FETUS will satisfy your hunger for extreme blood and gore. I still can't get that finale out of my head. This film as one of the greatest endings in splatter history, and if you can make it through the 74 minutes of brutal gore and murder that FETUS has to offer, this is the movie for you. Actually, this isn't just a movie, It's a FUCKING MOVIE. I'll post the links for Morbid Vision Films, and the link to actually buy FETUS and some other damn fine splatter-pieces. 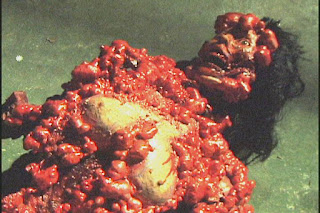 Go to the Morbid Vision site HERE and you can buy FETUS HERE
Posted by Jake at 10:09 AM