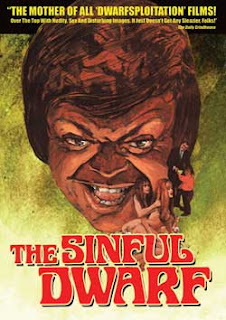 Howdy Folks, and welcome back to a new installment of the Repugnant Review. Today, I watched the almost forgotten sleazy "dwarfsploitation" flick, The Sinful Dwarf. Directed by Vidal Raski (real name Eduardo Fuller) this film was almost lost in a janitors closet at the Danish Film Institute, and thanks to the great people at Severin Films, I was able to get a nice restored version of this from their incredible library. The plot centers around a maniacal dwarf (Torben Bille) and his drunken mother (Clara Keller) as they run a shanty hotel, and kidnap the women who stay there to turn them into heroin addicted sex slaves. A young couple moves into their house, and the diabolical duo take a liking to the sweet, blonde, and beautiful Mary (Anne Sparrows), hoping to add her to their collection of doped up prostitutes. It's silly, demented, and depraved, but you know what... it's not half bad.

I really thought I wasn't going to like this at all. I figured it was going to be too goofy; just a small person who looks like a shrunken Jack Black torture and murder gorgeous women. Oddly enough, The Sinful Dwarf has a fairly decent plot. The acting was pretty above average for this kind of film, and the woman who played the dwarf's mother was pretty funny. She kind of reminded me of a cracked out Cruella DeVille. Torben Bille who played Olaf the Dwarf was pretty fun to watch as well, with him being equal parts creepy and silly as the same time. 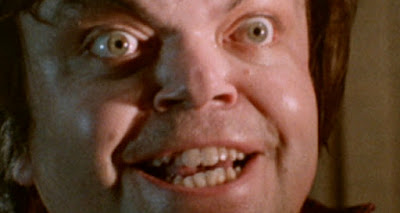 I didn't think I was going to say this at first, but I definitely recommend this. It's absolutely demented and sleazy, and I enjoyed just about every minute of it. You filth mongers would get a total kick out of this, especially if you're into whacky exploitation films that teeter on the exploitation/porn spectrum. This was rated X after all. If you're interested in picking this up, check out the Severin Films link on the right hand column (with other amazing distributers) labeled "THE GOODS". Buy it, watch it, and let me know what you think!