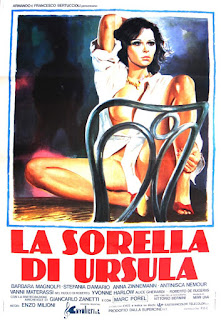 The Sister of Ursula, written and directed by Enzo Milioni, might just be one of the sleaziest giallo films I have ever seen in my life. Barbara Magnolfi (Suspiria) and Stefania D'Amario (Zombie) star as two Austrian sisters looking for their mother who abandoned them as children. After the death of their father, they were left with some money and booked into a hotel on the Amalfi coast in Italy, hoping to share the inheritance once they find their mother. Ursula (played by Magnolfi) seemed to be the most affected by her fathers death, and after booking into the hotel, she starts to have very violent visions of the lustful women staying at the hotel being brutally murdered. Her visions become real after many women from the hotel are brutally murdered by a mad man, and what makes this very nasty is the weapon used in the murders... a giant wooden dildo. 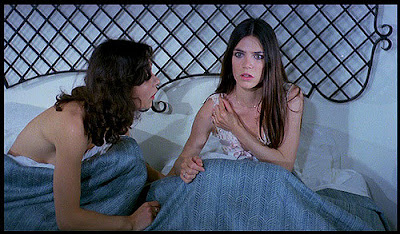 This is giallo at it's sleaziest, and if you're looking for something purely dirty with lack of any interesting story, you should check it out. I'm not saying it's terrible, but if you're expecting something like Suspiria or A Bay of Blood, you'll be pretty disappointed. It's borderline giallo, but I'd definitely call it straight up sexploitation. If you like blood, bush, and titties over story line, then this is the flick for you, you damn pervert. I got this film in the Euro-Sleaze collection from Severin Films, along with The Sinful Dwarf and Hanna D, so expect future movie reviews with gratuitous sex and violence (and soon, dwarfsploitation!)