I don't think I should of eaten before watching this... 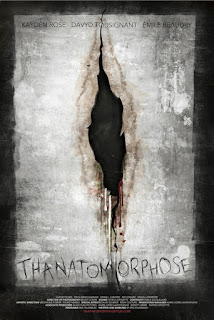 Hey there everyone, welcome back to the Repugnant Playhouse and tonight I got another disgusting film to introduce to you too. I had just finished watching the 2012 gross out horror film Thanatomorphose, a nasty flick about a woman who wakes up one day to find out that she is slowly rotting. It's a pretty interesting concept, and I could only imagine the possibilities that would come out of the content of the film story wise, and especially the special effects. Although incredibly gross, and this is coming from a person who has witnessed some disgusting things, this film was pretty damn great.

First off, I have to give some praise to actress Kayden Rose (Laura). Talk about an insane roll, which mostly included her being completely naked through out the film, and slowly being caked in some of the most gruesome gore make up I have ever seen. The progression of the wounds were just perfect, with the character Laura finding small bruises on her body after sleeping one night, and seeing them just get bigger, darker, and eventually we start to see the inevitable rot. It was glorious, and absolutely disgusting. This movie just had an incredible SFX team, and it really showed, and you almost don't see that style of realistic gore anymore, and actually, you know what this film almost reminds me of? Nekromantik and The Death King. 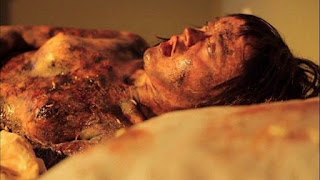 I mean, it has a lot of those Jorg Buttgereit elements. A fairly low budget artsy horror film with a deep theme of Death and Decay, incredibly great special effects and visuals, lack of dialogue with the characters actions and camera really telling you the story... it's like mixing the hyper-sexual elements of Nekromantik with The Death King's theme and visuals of death and the mental anguish of slowly dying. What's great is that Thanatomorphose completely stands on its own, both content wise and visually. Dark, gritty, gross, disturbing, and done very well I have to say. It's been awhile since I've seen a movie that really got to me like, not really in a "gross out" kind of way, but it was just incredibly compelling, and I very much enjoyed watching it.

I definitely recommend this. If you're easily grossed out by extreme gore, blood, and other bodily fluids, just don't even bother. It's an aquired taste for sure, and this is a pretty extreme film. Speaking of taste... I really don't recommend eating before or during Thanatomorphose... just don't... or do it, I don't care. Just don't go crying to me when you choose this movie to watch during date night with your gf/bf and you suddenly upchuck on your partner.