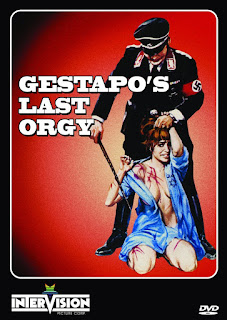 I think one of my favorite things about giallo, or Italian exploitation/sexploitation films, is no matter how shocking or outrageous the film is, it is always filmed beautifully and edited perfectly. The material coming out of this film is absolutely mind blowing, with some of the most shocking scenes I have ever witnessed. One scene involved Nazi officers eating a stew consisting the flesh of Jewish infants, and when one of the Jewish women passes out as they eat, they cover her with liquor and set her on fire... and then they eat her. This scene is actually still banned in the UK versions of the films, and rightfully so. I really enjoyed the cast in this one, especially Daniela Poggi who played Lise Cohen, an unbreakable Jewish woman who will not give in to the Nazi's torture. Adriano Micantoni who played Commandant Conrad von Starker was pretty awesome as well; an absolute bastard and enjoyable villain. 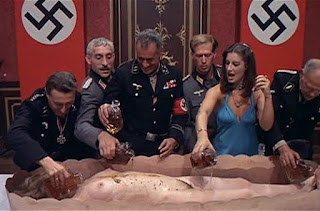 This movie had a great mix of disturbing content and heavy drama. It was almost on the line of being an actual Nazi-era war drama, but due to the extreme content it's considered a Nazisploitation flick. It really is a great film, and if you're into these kind of films, definitely check it out. This film will appease any euro-trash maniac and filth monger. You can pick this movie up from the great Severin Films, and if you're cool enough, you'll spend the few bucks to pick up Gestapo's Last Orgy and few other films from them. I'll post the links below and let me know what you think of the film!