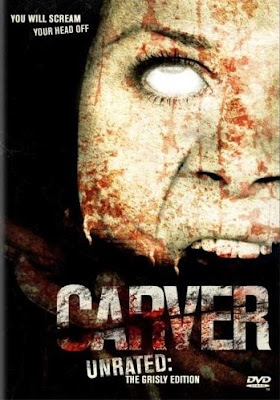 WHAT DO YOU GET WHEN YOU HAVE A GROUP OF COLLEGE KIDS BEING TRACKED DOWN BY AN OBESE HILLBILLY?.. Um, I'm not sure. I could probably name a dozen films with that same premise, but CARVER stands out for me. The slasher flick written and directed by Franklin Guerrero Jr is what I would consider the best hillbilly splatter flick. I actually saw this movie way back in High School with a buddy of mine, and since then it has always stuck with me. I mean, it's not the greatest horror film of all time, it definitely has it's issues, but it's just a fun movie. I'm always a sucker for extreme blood splatter and gory special effects, and Carver really hits hard when it comes to the gruesome imagery.

As I said, it definitely has its issues. The cast in particular is pretty bland, and even the killer himself is pretty boring. He's your typical fat redneck in a mask kind of deal, and the cast is made of the handsome dude, the whiny hero, the obnoxious couple, and the troubled female character. Sound familiar right? I don't want to sound to rough though. This is definitely a low budget splatter flick and I'm assuming they spent most of the budget on the gore and effects... definitely not getting the greatest actors. Speaking of gore, Carver follows through with the blood. There are so many memorable deaths in this, and they're killed in the most brutal fashions. One of the kills reminds me of this not so obviously titled song, "Hammer Smashed Face" by Cannibal Corpse. Absolutely gruesome, and very very fun. 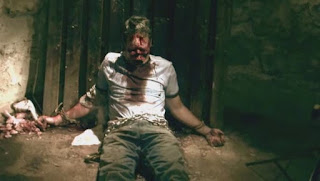 The story itself is pretty run-of-the-mill. College buddies on break, and attempting to camp in backwoods hillbilly territory. They add a pretty cool concept into the mix, where the rotund killer films his own little movies, and names his little snuff flicks corny slasher names. Other than that, it's still a decent horror film, and a very fun and entertaining slasher flick. I highly recommend this to all of the gore-hounds out there, especially for those who love outrageous effects. Blood, gore, rednecks, and torture... how can you not enjoy that? I have the Unrated: Grisly Edition, which has some of the nastiest scenes I've ever seen (for those who are testicle sensitive, beware), and I don't think an actual rated version exists. Rated versions suck ass anyway, always go for the unrated cuts, especially when they are labeled with "Grisly" in the title. Check it out and let me know what you think!