In Memoriam: George A. Romero, Godfather of the Dead 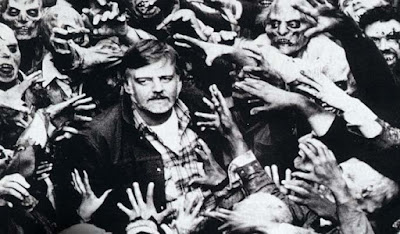 On July 16th 2017, we lost a filmmaking legend. The Father of the Zombie Film passed away in his sleep after his brief fight with lung cancer, and since then social media has been flooded with passionate tributes to the film legend. I was honestly shocked, and deeply saddened by this loss. It really hit home, considering the first horror films I've ever seen were Night of the Living Dead, and Dawn of the Dead. Even now I'm sitting here typing this with a grimace on my face, watching The Dark Half, one of a few of George Romero's collaborations with the brilliant horror author Stephen King. Romero's films were way ahead of their time, tackling some of the biggest issues at the time, especially with his film Night of the Living Dead; a film that had an African American in a lead role (Duane Jones), which was very controversial at the time with the Civil Rights movement at it's strongest, and scariest point in time.

George Romero knew how to get reactions out of people, not only with blood and gore, but just his satirization of the world around him. He poked fun at the absurd bullshit going on in the U.S. whether it be racism, consumerism, war, and the tyranny within out own selves. He showed us that we could all become these creatures; Soul-less monsters who want nothing to do than destroy and consume. His work was deeper than most, and we will always remember the impact he left on not only the horror community, but the world of filmmaking.

Fans, let us remember the Legend by what we do best, by putting our collections together, and having a lengthy marathon spanning his career. I'm actually doing that right now as I type this, and you should to. Start with Night of the living Dead, and up. Let us praise his work, and remember the great times we had watching them when we first watched them for the first time. And if you know someone who hasn't seen any of his work, share it with them. Spread the Gospel of the Dead and the incredibly work that George Romero has given us over the past 50 years.

Rest in Peace, George A. Romero. The world will never be the same without you.