demanding full time job, but I've been aching to come back and review some more films. What could seriously be any better than ringing in the new REPUGNANT PLAYHOUSE than an incredibly depraved yet beautifully shot slasher shocker by the same guy who brought us the disgusting duo of necrophile flicks, Necromantik 1 and 2. Schramm is the last directorial feature of Jorg Buttgereit, and it is just as brutal and surreal as his other films. 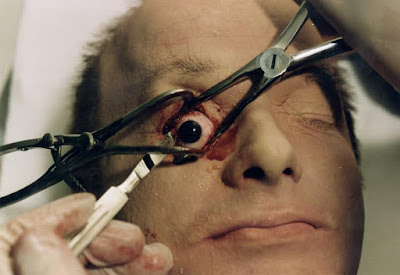 Schramm tells the story of a murderous cab driver, who has recently gotten into an accident in what appears to be his apartment. As he dies, memories of his foul past begin to flash back to him, and then we witness the horrible and disgusting acts he does upon people he has murdered, and himself. Like Jorg's other films, the blood and gore special effects are incredibly well done, and when you mix that with incredible 16mm camera work, Schramm makes for a very brutal, yet artsy feature. There were some moments that genuinely made me wince, especially the scene involving a hammer, some nails, and the tip of a penis... uhggg. This is a great movie, and maybe even a great movie to begin with when it comes to brutal horror films like this. It's gory and disgusting, but also interesting, and incredibly well made. If there is one thing that Jorg Buttgereit has always done, it's make a brutal shocker like this, and turn it into a gorgeous piece of art.

I definitely recommend this, but only if you're into extreme depictions of murder and torture. Man is it gruesome, but it's a very fun watch, and at 65 minutes, what do you have to lose? I'm not sure if there is any streaming devices carrying this film, but I bought the Blu-Ray from CULT EPICS, and it comes with a ton of extras including the making of the film, the soundtrack, and Jorg Buttgereit's earlier short films. Pick it up today! Links to the CULT EPICS website will be posted below. Enjoy!

BUY SCHRAMM AND OTHER GREAT MOVIES AT CULTEPICS.COM 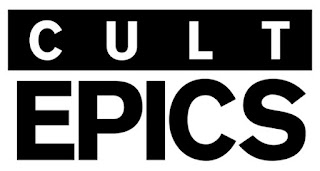