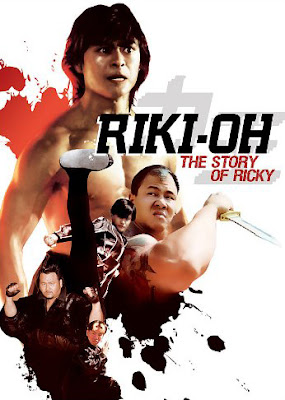 The notorious Riki-Oh: The Story of Ricky is widely known as one of the goriest martial arts movies ever made. With a story about an indestructable man bent on fixing the system from inside prison walls, this film takes the campy splatter genre and blends it perfectly with the kung fu film. Riki-Oh was originally a manga series by Masahiko Takajo and Tetsuya Saruwatari, a 12 volume series that ran from 1988 to 1990. When the time came to adapt the extremely violent manga to film, Lam Nai-Choi came to helm the project as writer and director. I think the film stayed true to the original story, with only one minor change regarding the focal point of Ricky's revenge. In the manga, he enacts revenge on the Yakuza after they killed a child who befriended him. In the film, it was changed to his girlfriend. Everything else is pretty much the same, making this film a great manga to film adaptation.

So Riki-Oh is blessed with the power of inhuman strength. He can literally punch holes through people, and any other object. There's even a really gross scene in which Ricky ties his arm tendon back together during a huge fight scene. Holy shit, they weren't kidding about the violence in this flick. This movie is definitely up there with Dead Alive and Evil Dead 2 as one of the goriest movies I've ever seen. Some may consider this to be incredibly campy, and it is. What low budget gore flick isn't, really. The english dub is hilarious, so luckily I found the subtitled version on Youtube. Honestly, as silly and over the top this film was, I really enjoyed it, especially as a corny kung fu movie. The added gore and gross out effects was just an added bonus. The fight scenes were also incredibly badass, and choreographed very well, making it a very entertaining watch for any kung fu fan.

You know, I rarely do this, but I did find it on youtube for free. I like to make a habit of buying these movies and reviewing them, but this has been on my list for years, and I just had to watch it. And guess what, I'm glad i did, and now I'm definitely going to buy a copy of this flick. If your a fan of over the top, balls out kung fu action mixed with buckets of blood and gore, then you'll definitely get a kick out of this... See what I did there...