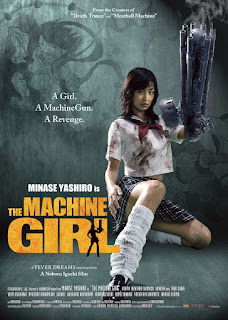 HALF WOMAN, HALF MACHINE, The Machine Girl is an action packed revenge thriller full of stylized violence and bloodshed. This wild Japanese film was written and directed by Noboru Iguchi, who is known to put out very funky, violent material (Zombie Ass: Toilet of the Dead, Mutant Girls Squad, RoboGeisha), and The Machine Girl is definitely no exception. The story follows Ami (Minase Yashiro), a young woman seeking revenge for the death of her brother after the Yakuza Boss' son beats him, and pushes him off of a building. She comes close to killing the boy, but is over powered by the Yakuza, and eventually gets her arm cut off as punishment. She escapes and takes refuge with a couple mechanics, who build her a machine gun arm. Miki (Asami), joins Ami in her revenge plot, as she also lost a brother to the Yakuza. With Ami's machine gun arm, and Miki's chainsaw, a path of blood and gore is left behind them as the try to find, and kill the ones that wronged them. I bought this a few months ago and it took just as long for me to watch it. It was a random buy, and I'm pretty glad I spent the $12 on it. The Machine Girl was a fun movie, with lots of silly, over the top violence a la "Tokyo Gore Police" (although not as visually disturbing or weird). The story was pretty solid, but I'm a little biased towards revenge films. Does it have the same tropes that most Japanese revenge stories have? Absolutely, but throw in a girl with a machine gun arm, and a ton of blood... BAM, you got yourself an entertaining movie. I watched the english dub, which I almost never do just because it sounds funny to me, but the movie was already over the top, so the hilarious delivery of every line honestly made the film a little better. There's one scene in general that made me laugh where the Yakuza boss is watching Ami beat the shit out of his men, and all he says is "SHE IS EXCEPTIONALLY GOOD!". The emphasis on "exceptionally good" just killed me, what an absolute corn ball.

I enjoyed this movie. If you ever watched Tokyo Gore Police, I think you might enjoy this too. It's over the top, silly, cheesy, Japanese goodness, and if you ever find a copy of this movie cheap, pick it up. Call some buddies up, get a little toasty, and get yourself hyped on gore, and laugh your way through that hilarious dub. Enjoy! 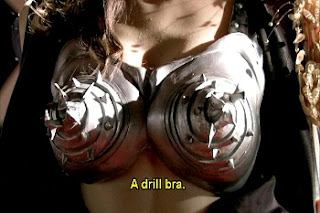