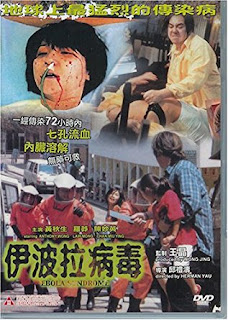 With all of the terror the media caused on our supposed Ebola outbreak last year, splatter and exploitation fans steered me into the direction of the outrageous black comedy, Ebola Syndrome. Directed by Herman Yau, Ebola Syndrome follows the story of Kai (Anthony Chau-Sang Wong) on the run from the Chinese government after murdering his boss, and his boss's wife. He settles in a small South African town working as a cook, and one day after trying to buy pigs from local tribes people, his truck breaks down. While his companion tries to fix it, Kai takes off, and stumbles upon a dying South African woman. Being the vile piece of shit he is, he rapes her, and unknowingly contracts the Ebola virus. This ridiculous story doesn't stop there, as Kai is immune to the effects, making him a walking disease. He spreads his virus to everyone at the restaurant, and since he's on this Ebola kick, he goes back to China to wreak more havoc. 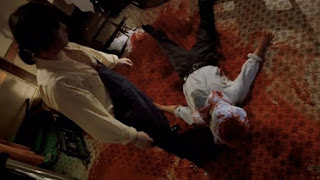 What a truly bizarre movie. A man immune to the effects of Ebola, spreads Ebola to everyone he sees, and that's it. There is a small subplot towards the end where he meets up with an old flame and his supposed daughter, be it doesn't really end well. The ending is just Kai being chased by the police, as he cuts himself and spits blood at them. If this was to happen today, there would be an all out fear campaign. If there was even a chance of anyone surviving Ebola, and becoming immune to its effects, I would honestly be a little freaked out. As brutal and gross as this movie gets, it consists of a comedic background. One scene shocks you, and a few seconds later, the film makes you giggle. Some scenes are definitely there to just gross you out, with out any clear context to the story, but it's easy to look over, mostly due to the fact that the whole movie is fucking goofy to begin with.

I can't say I was the biggest fan of this movie. It was just a mish-mash of genre mixing at uneven paces. It's possible to have a gross-out comedy film, as John Waters and Lloyd Kaufman have proven time and time again, but Ebola Syndrome just went to such extremes, that it almost took away from anything that was remotely silly. I did giggle at a few parts, but most of the time, I would be asking myself... what the fuck? It's not horrible, but it's not the great either. If you're into bloody, gross out comedies, give it a shot. I found the whole film on Youtube for free, so no need to spend your hard earned money on this Ebola infested pile of poo. Let me know what you think!

I WOULD RATHER BE DRINKING PISS, THAN WATCH THIS AGAIN 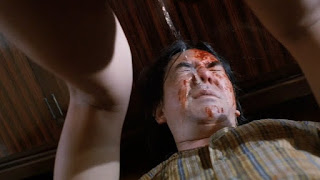