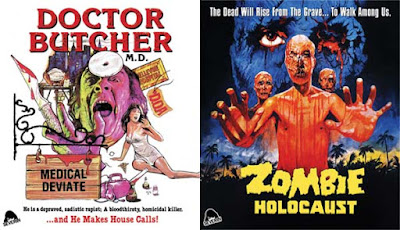 Hello there, my fellow repugnant friends, you've made it through 2016 and made it to the new year. Congrats. If you're as boring as I am, you probably spent your new years eve/day watching movies and getting ripped. What better movie could I have chosen other than this gore-soaked zombie classic... DOCTOR BUTCHER M.D... also know as Zombie Holocaust and Zombi 3. This has been on my list for awhile, and thanks to my badass Grandmother, I got it for Christmas (how fucking cool is that). This cult classic follows our main characters, Lori (Alexandra Delli Colli), and Dr. Peter Chandler (Ian McCulloch), and their morbid quest to find out why an island of tribes people suddenly became cannibals. They head to the island, looking for the source of the cannibals with the help of the mysterious Doctor Obrero. There's just one problem I had with this movie... It was almost too similar to Lucio Fulci's "Zombie" (Zombi 2).

I can see why this movie is always featured in my "recommended" list. It's great gory fun through out the entire flick, but like I said, too similar to Zombi 2. Hell, Ian McCulloch was even in this, AND Zombi 2. Kind of funny considering Doctor Butcher is also known as Zombi 3, making it a semi-sequel to Lucio Fulci's Zombie. The main difference is the fact that Doctor Butcher had Cannibals. Literally everything else was the same. The zombie make up, the island it takes place on, a weird and mysterious doctor with an islander assistant, Ian fucking McCulloch, and it just had the atmospheric Fulci feel too it. It's not a major issue, since it's still a very good movie with its own story, and I'm pretty happy that I watched it. I'll definitely watch this again. I should also mention that this movie came with a fucking awesome Barf Bag. I don't know of any other movie company that puts out novelty stuff like this, and I thought it was very awesome. We need more of that old-school "novelty" flavor.

Thanks to Severin Films, you can buy this movie on a double disc blu-ray, with hours on bonus material, reverseable cover, and the kick ass barf bag. I highly recommend this movie, especially for all you gore hounds out there. Pick it up, and let me know what you think! Buy it HERE. 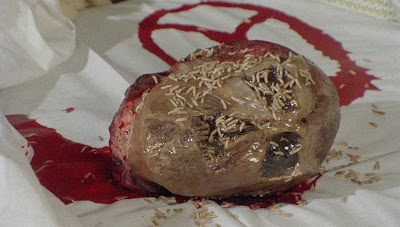