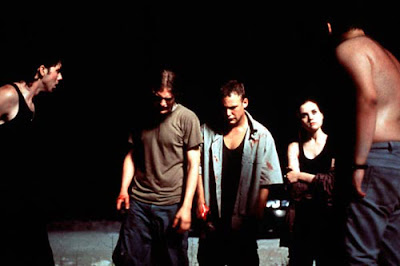 Ahhh yes... the infamous Larry Clark, director of the uncomfortable portrait on teen life in New York City, Kids. Six years later, he hits again with Bully, a movie about a group of wayward teens who plot to kill their tormentor. Probably not as sexually graphic as Kids, but it doesn't make the subject matter any less disturbing. The most uncomfortable part of the movie, is the fact that it is based on an actual real life crime, and it's pretty damn accurate too. 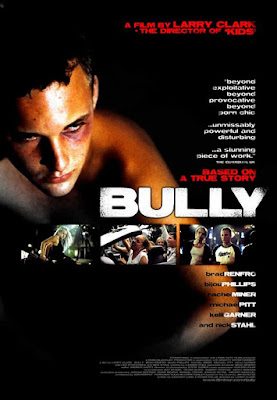 Bully is based on the murder of Bobby Kent. On July 14th, 1993, Bobby Kent was murdered by seven people, including his best friend Joseph "Marty" Puccio Jr. Everything in this movie was accurate to what I read about the crime, even down to the gory details of how Bobby was stabbed, beaten with a bat, and had his throat sliced. I would of felt bad if it was just that, an innocent person murdered by his friends, but this movie painted quite the picture of Bobby Kent. Bobby was a grade A piece of shit. He abused his friend, Marty, constantly, fucked his girlfriend, raped her friend, and even tried peddling homemade gay porn to local smut shops. I'm not saying he deserved it, but I really don't feel bad either.

With an amazing cast, including the late and great Brad Renfro (Marty) and Nick Stahl (Bobby), this movie is need to be seen. Larry Clark hits us with his gritty and realistic style, adding even more heartfelt and shocking drama to this already sad real life occurrence. The acting was phenomenal, and the cinematography was absolutely gorgeous. I bought this movie for just a few bucks on Amazon, so buy it, rent it, and tell me what you think. There's plenty more of Larry Clark coming up on The Repugnant Playhouse!