Bad Lieutenant tells the story of a man who has a horrible drug addiction, terrible gambling problem, and uses his position of power to lie, cheat, and steal through his dread filled downward spiral called "life". Harvey Keitel's character, who just goes by "Lieutenant", is such a devastatingly powerful piece of shit, and what makes him greater is the fact that he knows he's a massive piece of shit. It's almost inhuman, and I don't think I've seen a character portrayed this way since Ray Liotta in Goodfellas. It isn't until a nun is raped, the Lieutenant visits her in the hospital. She knows the men who raped her, but she won't give him their names, because she forgives him. Being absolutely thrown off by how strong and forgiving she has become, he wonders now if he too will someday find salvation. Some peace at last. 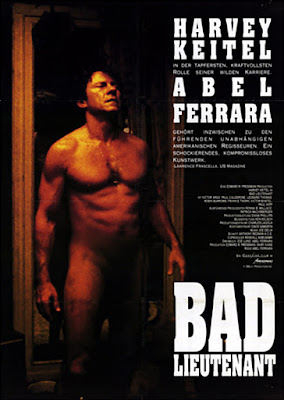 This movie has me clutching my chair for the entire 96 minutes it was on. I've never seen any film that catalogs a persons descent into insanity quite like this film did. It shocked me in all of the best ways. Harvey Keitel's performance in one of the most honest portrayals I've ever seen in my life, and I give him a standing ovation. This was much more than a typical crime story, or a cop story... it was just about one man, and whether or not he would finally break out of his shitty life, and finally find peace with himself. Absolutely powerful. I was incredibly impressed with everything about this film. 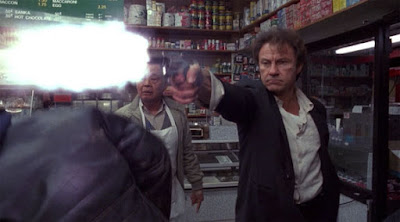 Bad Lieutenant is an amazing piece of work. It's gritty and exploitative without being too dirty or mean, and I can't praise Harvey Keitel's performance even more than I have already. I highly suggest this film to anyone who loves film, in general, because I can honestly say that this movie is one of the greatest films of the 20th century. Just incredible.