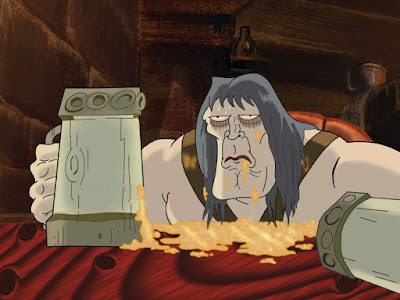 If you were a slacker teen like me, you spent countless school night staying up till 3am watching some of the best cartoons Adult Swim had at the time. Aqua Teen Hunger Force, The Brak Show, Sealab 2021, Mission Hill, etc etc, but remember that really fucking awesome cartoon about a brutal, axe wielding Barbarian? No? Well that's because it was only that one episode, a pilot to a cartoon that never was. Over the years, Korgoth of Barbaria has been gaining a huge following, and petitions come out every year asking for a revival. At the time of it's release, it was understood to come out as a full series on Adult Swim, but due to the show being pretty expensive to make, it was never given the go.

Korgoth was absolutely badass. It was animated perfectly, and incredibly detailed (I guess this is where the "expensive" term comes into play). Everything was so smooth and fun to look at, and we can all thank Aaron Springer (Dexter's Laboratory, Spongebob Squarepants, Samurai Jack) for this, the same guy I wrote about a couple weeks ago when I saw his college film Special the Cat: Baby's New Formula. I should also mention the incredibly tight cast of voice actors on this pilot, including Diedrich Bader, Corey Burton, Craig T. Raisner, John DiMaggio, and Tom Kenny. It would be great to see this cartoon come to light again, considering the slew of super violent content and overly weird content on Adult Swim right now, or even a small streaming platform. Either way, you can actually watch the pilot in full right here on youtube, for free. Let me know what you think, and keep bugging adult swim about it.