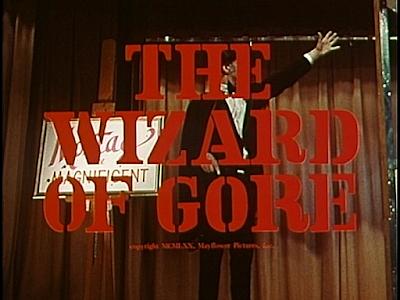 Yesterday, one of my Amazon packages came in the mail, and I was excited to see that it was the one that contained my Herschell Gordon Lewis blu-rays! Maybe I was too excited, but I never actually owned physical copies of these movies. I would just watch the shittiest rips and bootlegs I'd find through friends and the internet, but then I saw that Something Weird Video finally put them out on blu-ray. Two blu-rays, five movies. Fucking amazing. I purchased "The Blood Trilogy" which featured "Blood Feast", "Color Me Blood Red", and "2000 Maniacs", The other is the "Blood Drenched Double Feature, which consisted of "The Wizard of Gore", and "The Gore Gore Girls". I've seen most of them, but I had to watch my favorite one before I went to bed. Out of all of them, I watched "The Wizard of Gore". I've seen several rips of this movie, including bad vhs copies, dvd rips, youtube, etc etc, and I was so pleased to see this some-what restored. It was like watching it with new eyes. "The Wizard of Gore" follows a Tv talk show hostess and her boyfriend investigate the great Montag the Magnificent, a magician who can control people with his mind, and use them in his onstage torture show. The women he tortures on stage may be fine after the initial act, but later, the strength of his magic leaves the women, and they die the same way they were tortured on stage. It's a very neat concept, and it really gives Herschell a better chance to get more shock out of gory ideas, especially with the several acts of gruesome torture that occurs in the film. 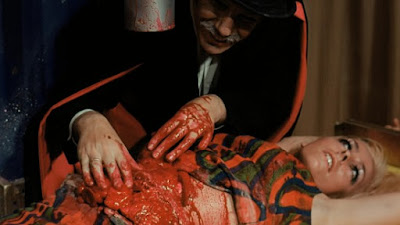 I've seen this several times, so I obviously enjoy the movie, but even though this is a fun splatter flick, it does have it's flaws (flaws that can be definitely overlooked). They're the typical flaws you'd see in most HGL movies; bad acting, over the top "bad" special effects, and probably the most noticeable is (this movie at least) the poor sound. Everything kind of sounded it was recorded on a little tape recorded, mic pops and everything. Sure, it's obviously a low budget feature, but I've seen zero budget movies with better sound. I think what I, and many other people find appealing in these kind of movies, is the scope of how gory and adventurous Herschell got with these scenes. You know it's fake, I mean, really fake, but it doesn't take away from the scene, and it still somewhat grosses you out, and makes you squirm in delight. These are just incredibly fun movies, and you're always waiting to see what happens next. Is that woman going to be cut in half with a chainsaw? punctured by a metal press? stabbed through the head with a railroad spike? Herschell Gordon Lewis' mind went to some entertaining and brutal extremes to make some of the most innovative and shocking horror films of all time, and we love him for it.

I bought these movies for about $14 a piece, not bad for two blu-rays featuring some of the best splatter movies ever made. I'll post the links to Something Weird, Amazon, and the trailer below. I highly suggest this movie, so if you do buy it and watch it, tell me what you think! I'd love some feedback!

BUY IT HERE ON AMAZON 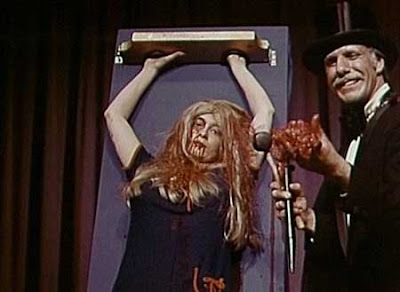