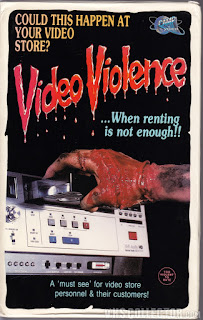 Another thanks to Ty, again, for letting me borrow his box-set of "The Basement", which comes with a VHS copy of "The Basement", and a 3 disc DVD set with the main film, and a few other "lost" super 8 horror films. Man, is this cool. The big box vhs cover is so nostalgic of those old Wizard Video big box cases. Even though the main movie is the bulk of this box set, a couple movies stood out. I'm talking about Video Violence 1 and 2, the gritty, gory, blood soaked super 8 films by Gary P. Cohen. How could you not check out these movies, just by name alone. "Video Violence"... imagine all the ridiculous possibilities. Video Violence follows a husband and wife who open up a video store in a small hick town. They come to find that all the locals prefer horror films and the occasional porno, but it gets really out of hand once the store starts finding unmarked tapes in the return bin, showing real people being killed by the deranged townsfolk. In Video Violence 2, two of the killers from the first film, Howard and Eli, starting there own TV show out of their basement. They basically just murder people on live TV, with other aspiring psychopaths sending in their own videos to be shown on the show. Very bizarre but very interesting scenarios. Everything a gore mongering camp fiend could ask for. 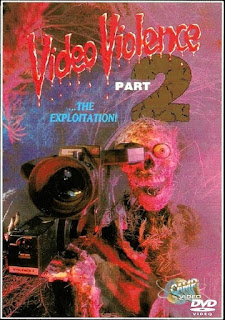 These movies are very reminiscent of Herschell Gordon Lewis' films, with it's dark humor, over the top gore, and less than spectacular acting, this basically hits the nail on the head as far as splatter movies go. Sure, the acting is bad, but isn't kind of supposed to be? I love that kind of stuff, and just because it's "bad", it's still entertaining. The killers were incredibly fun, and since I work in a video store, I had a fun connection to the main character. The plot for the first Video Violence is just great. A town full of horror fans who make their own snuff and terrorize the video store owners for being massive prudes. It's pretty damn hilarious. The deaths are absolutely over the top, but I enjoyed. Messy, blood splattered, gore-soaked greatness. Video Violence really pushes the comedy element much more than the first, and the blood and gore is turned up to fucking eleven. It's basically a horror/anthology type film, kind of like the V/H/S movie series today. Eli and Howard are incredibly entertaining, a couple of blood thirsty hicks going out of their way to please their fans. 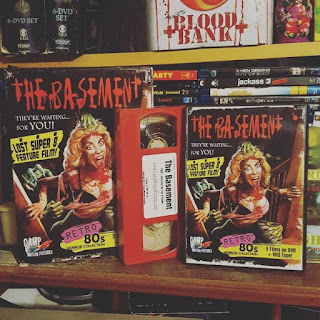 Video Violence 1 and 2 are the perfect movies to watch on a Friday with a huge group of friends. You'll laugh, flinch, and cringe through these films and beg for more. So what I want you to do is pick up some drinks, pick up some weed, and order a fat fucking pizza, because you're going to have a blast chilling out and watching these ridiculous ass movies. Let me know what you think!