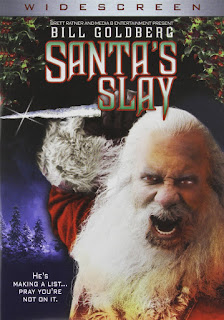 Would could be more compelling than watching a Christmas themed horror movie where wrestler Goldberg plays a murderous Santa? NOTHING. This Christmas slasher was one of the holiday horror movies I actually enjoyed. Santa's Slay has a very interesting take on the Santa Clause story, where Santa is actually a demon who caused havoc all about the land. An Angel shows up, and makes a bet with Santa that if he could push a rock close to the edge of his fishing hole, he could stay evil, but if he loses, he must be good for a thousand years, and spread joy to the children of the world. Santa ultimately loses this bet, and must become the Santa we all know and love. One thousand years later, Santa goes back to his demonic ways and begins to reign hell and torment across the world. It's up to Nick, Mary, and Nick's weird Grandfather to stop Santa before he kills more people on Christmas. Absolutely insane.

I really liked this movie, and it hooks you in with the hilarious, yet brutal introduction to Santa murdering a family with Christmas related weapons, and Goldberg's brute strength. There was nothing funnier than seeing Santa brutally kill Fran Drescher, Chris Kattan, and Rebecca Gayheart in that opening sequence. It was funny as it was violent, and I couldn't stop watching. Even Santa's demonic buffalo/reindeer was bad ass. Lots of great practical effects and action. I was also really impressed with Santa's suit, which had that classic folky/Scandinavian style. Everything was pretty top notch, and I though Goldberg absolutely kicked ass playing Santa. The acting was overall pretty decent, and I really can't find a flaw with the film. Some people might take notice to the bad CGI job on Santa's sleigh when it shows him flying around, but for me it was easy to over look. I highly recommend this movie, and if you find it cheap online, buy it.

Let me know what you think, and more Christmas review to come!