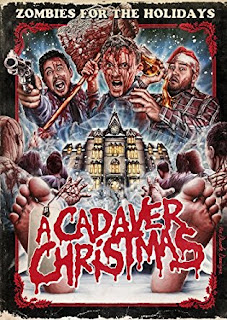 HAPPY HOLIDAYS, MERRY CHRISTMAS, HAPPY HANUKKAH, MERRY KWANZA, WHAT THE FUCK EVER. Welcome back to the Repugnant Playhouse for some gore soaked holiday reviews. I was pretty surprised at all of the Christmas horror films out there, and since I've only seen a couple in my life, I figured it was about time to branch out into this joyous and murderous genre. The first on my list happened to be the holiday themed zombie flick, A Cadaver Christmas. A college janitor teams up with a drunk, a suspended cop, and the college student/security guard to destroy zombies that a college professor unleashed inside the school. The movie is very reminiscent of classic zombie films, such as the Romero "Living Dead" series, but covered in Christmas lights, tinsel, and ornaments. 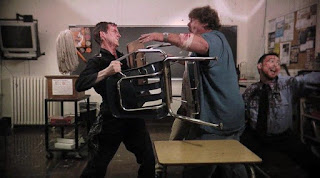 The acting was really silly and over the top, just like the script. The janitor was so intense with everyone, and I immediately disliked him as a character. The most annoying thing was that the janitor kept referring to the zombies as "cadavers", which never made sense to me. It isn't till later he starts calling them zombies, because you know, cadavers are just dead people, and zombies are the ones that wake up from the dead and eat people. The professors little story and explanation on how the zombies came to be was pretty neat, and if they actually made a story based on that alone, I think I would of enjoyed it more. The worst part is that I don't think you would have known that this was a Christmas horror movie if it wasn't for the fact that there were Christmas decorations everywhere, oh, and the name of the movie. Other than that, it's a typical Zombie movie with a goofy cast and cheap effects. The movie as a whole isn't that bad, I did enjoy some scenes, but to call this an all out Christmas Zombie movie is just asinine. I would definitely suggest this to someone who loves zombie flicks, and doesn't care about the plot and characters. Not a terrible movie, but it's just not for me.

Let me know what you think!