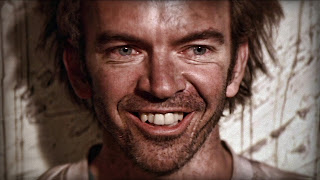 After quite the break for Thanksgiving and other festivities, I'm back at writing reviews. For the 1st of December, I'm reviewing something that I've always wanted to see, the Australian dark comedy, Bad Boy Bubby. This has been on my wish list for awhile now, and after spending a ton of money on movies recently, it's finally in my hands (thanks to Blue Underground). This movie stars Nicholas Hope, playing Bad Boy Bubby himself, and this has got to be one of the most deranged, funny, and thought provoking movies I've ever seen, especially for a movie with such subjects as murder, incest, and rape.

Bubby lives with his abusive mother in a shitty dark apartment. She suffocates him, sexually abuses him, and tells him that the outside world is full of poisonous gas, so he's been kept locked away since he's been a child. Bubby is only aware of what surrounds him, mostly repeating things his mom says and does. He's basically an adult with the mind of a child, sort of unaware to the harm of what his mother does to him, making all of the abuse seem normal. Everything gets worse when Bubby's estranged father comes back into the picture. Bubby eventually becomes jealous, and as his parents were sleeping, he wraps their faces in plastic wrap, killing them. This is when he makes his way to the outside world, adventuring into the unknown for the first time. The best part of this movie is the fact that Bubby is technically still a child. He's not necessarily a bad person, he just literally doesn't know any better. Bubby learns as he goes, and a lot of the time it just doesn't go his way. He gets in trouble with the law, goes to jail, and tries to figure out what the hell everything is about. His life gets turned around when he meets a rock band on the road, and eventually joins them as their lead singer. With the band, he embarks on a journey of self discovery and learns about the life he never had. It's incredibly touching actually, seeing this character come into his own after being locked up for his entire life. 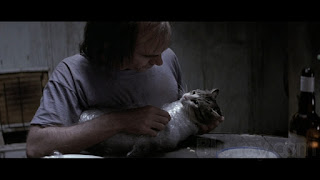 Some of the sweeter scenes really happen towards the 3rd act, when Bubby is helping out at a special needs home and becomes intimate with a real disabled person. I don't say it much, but it was cute. Seeing two people, outsiders and freaks in their own right, have generally friendly emotions for each other. Bubby eventually falls in love with one of the nurses there, Angel, a cute curvy woman who lives with abusive, religious parents. It's an odd connection for sure, with Bubby being mentally off and all, but it's genuine. All Bubby needed was love, and by the end of this amazing feature, that's what he got. From being shackled and abused in an apartment for 30 years, to being in a kickass band, falling in love, and eventually having some sort of a normal life, it was a wonderful sight to see.

I totally get why some of the scenes in this movie might turn some people off, but it's necessary as to set up what kind of person Bubby is. Nicholas Hope's portrayal of this character was totally believable, and the change from how Bubby was in the beginning to what he becomes at the end is just extraordinary. You really saw this character change, and become his own person. If I knew Bubby, I would absolutely be his friend. Besides the great acting talent in this movie, the audio and cinematography were just incredible too. To record the dialogue in the movie, Rolf de Heer sewed in binaural microphones about both of his hears, so everything you hear in the movie, is what Bubby is literally hearing at the moment. The movie also used 31 different directors of photography up until the last 3rd of the movie, with each different scene being recorded by someone new to give the same feeling Bubby gets when he see's something new. Pretty fucking cool if you ask me. All in all, this movie was an absolute blast, disturbing as it is touching, and I highly recommend this to anyone who wants a touching story with some hilarious and disturbing sequences.

P.S. Am I the only one who thought Carmel Johnson (Angel) was kind of a babe?