With the recent legalization of recreational marijuana in Massachusetts, I figured it would be a great time to get legally stoned and watch some of my favorite pot related horror movies. There are a ton to choose from, but these select few really stick out to me. Let's get ripped and check out some of what I think are the greatest, and funniest, stoner horror films. 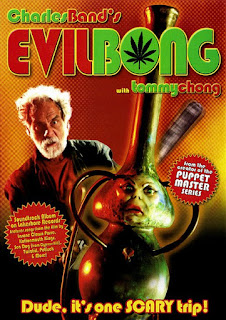 I know I know... "No shit", but a lot of people who are into the horror/comedy genre that I know, have never watched it. You've definitely got to be in a certain mindset to watch a Full Moon Feature film, considering the movies they put out (Puppet Master, Killjoy, Demonic Toys), but I love them all, and Evil Bong is no exception. Their is something awesome about an evil bong that kills you in your dreams, trapping your soul inside. It lacks in the gore department, but all of the bone-headed, stereotyped stoner humor makes up for it, with a good cast, witty and funny story, and great special appearances by Bill Moseley and Tommy Chong. 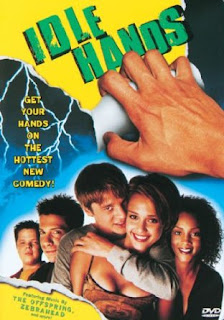 The 90's was almost the downfall of mainstream horror, except for Scream, but the 90's ended wonderfully with the release of the horror/comedy Idle Hands. Teenaged slacker and stoner, Anton (played by Devon Sawa), who's hand becomes possessed and begins killing everyone around him. Although it made a meager four million to it's twenty five million, it was one of the decades best horror films. It's slapstick horror at it's finest, with amazing practical effects, ridiculously great dark humor, and it's very reminiscent of Evil Dead 2, down to the possessed severed hand and all. My favorite characters had to be Mick and Pnub (played by Seth Green and Elden Henson), the goofy stoner duo who are friends with Anton. They fall victim to the Idle Hand in a gory, yet hilarious fashion, and they become resurrected as pot loving zombies who try to help their friend capture his demonic hand. Too fucking funny.

3. NIGHT OF THE LIVING DORKS 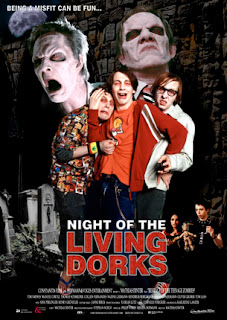 This is probably the best zombie/comedy in recent years, and hell of a lot funnier than anything this country puts out (Do we really need a Zombieland 2?). This German comedy follows three high school losers who get blasted by the ashes of Hatian zombies during a ritual with other people from school. When they take off in their van, they get into an accident after cabin baking the car and slamming into a tree. Next thing they know, they wake up in a morgue, and then that's when they realize that they have turned into zombies. All is well for awhile, using there newfound zombie powers to torment their tormentors, prank classmates, and try and get chicks. Everything eventually goes to hell once their urges for human flesh starts kicking in, and with the help of the goths from the ritual, they try to find a cure in the Necronomicon. This was a really good movie, with a very funny and solid plot, great actors, and it just had that nice high school buddy movie vibe to it. The gore and special effects were as gross as they were silly, especially the scene where the main character loses his balls while trying to make out with the school hottie. Totally worth checking out. 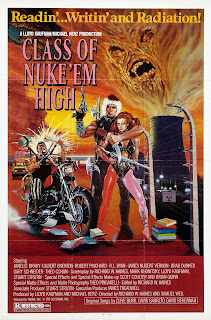 Ahhhh yessss, TROMA. There's just something about young people smoking radioactive weed and turning into mutants that makes me all giddy inside. I've seen this movie a bunch of times, and it never gets old. Shit goes down in Tromaville after a school is plagued with radioactive waste that's turning its classmates in punk loving, pot smoking, CRETINS! Anything for that "Atomic High" I guess. Just like all of Troma's movies, they're hilarious, gory, and absolutely bonkers. This is a must for stoners, with it's killer action, kick ass monsters, and awesome soundtrack, your THC infused brains will be entertained from start to finish.

5. CABIN IN THE WOODS 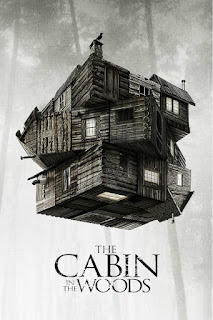 A modern horror film, which is pretty rare for this blog, but the reason for this movie being on this list is mostly due to the character Marty, the silly, funny stoner character everyone wants to be. Hell, he even influenced a group of people to create their own Coffee Mug Bong and have it be available to the public. I knew I needed one after seeing it in the film. Other than that, I think what attracts stoners to this movie, is it's stylized action, and the twists that follow during the climax of the movie. For a stoner, finding out that the Cabin was a simulation only used to sacrifice teens to Ancient Gods was pretty mind-blowing. I don't think most people were expecting it, and that's where it got the stoners. I know after I got stoned and watched it, I couldn't even believe what was happening, and every time I tried to predict what was going to happen next, it shifts and destroys everything I've been trying to predict. An absolutely great mind bender for anyone stoned enough to watch it.

I really hope you like these suggestions, I know I did. Let me know what you think, and let me know if there are other stoner/horror films I should check out for the future.