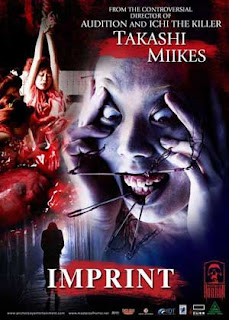 A few days ago I dropped a few bucks on Amazon and bought some movies off of my "Repugnant Wish List". I picked up four in total, but the one I've been dying to see is Takashi Miike's, IMPRINT. IMPRINT is part of the Masters of Horror series, but due to the disturbing content of the movie, it was banned from TV in the United States. For a country that prides itself on being "tough" and spewing "politically incorrect" rhetoric, it's full of pussies. Just with Takashi Miike's name attached to this, I new I was going into something absolutely crazy, and he surpassed anything I was expecting (like always). I've seen many trailers for this, and most of the time they only showed little clips of the infamous torture scene, but that isn't nearly as bad as what was to come. This dark film goes far past unsettling, and from what I saw, I could totally see why this was banned (you're all still pussies). Gore, sex, torture, pedofilia, incest, and abortion... quite a lot to pack into a one hour movie, but it really wouldn't be a Takashi Miike movie without it being as extreme as it is. Time to sit back, spark a bowl, and go through what makes this one of the most disturbing and unsettling movies ever made. 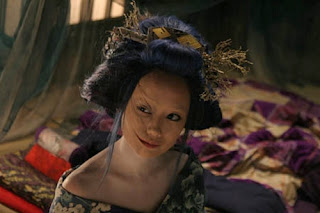 The short synopsis of Imprint goes as follows: "In 19th century Japan, an American journalist (played by Billy Drago, HILLS HAVE EYES) searches for the prostitute he'd loved and left behind years earlier. But on an island where demons and whores rule the night, a deformed courtesan awaits with a tale of extreme cruelty and perverse vengeance. What follows is an unspeakable orgy of torment and depravity, where the lusts of the damned will inflict woulds that remain forever. This is IMPRINT". This is putting it fucking lightly. Once the journalist meets the deformed woman, she tells him the entire story of what happened to his love. Supposedly, his lover stole a valuable Jade ring from the head mistress of the whore house, and she was brutally tortured into confessing, in which she never confesses too because she didn't do it... This is what most people see looking at trailers and images. The woman getting sharp needles stuck down her finger nails, gums, and being hung up side down by one leg. Honestly, it's not even the most disturbing part. It gets very unsettling once the deformed woman starts telling the truth about the situation, and reveals the horrible nature of her upbringing. For those who would be easily upset by abortion, incest, and pedophilia... don't even fucking watch it... it's a roughie, but thanks to my love for these kind of films, I truly enjoyed it. Per usual, I'm not spoiling shit, but I will go into why I enjoyed this, and other factors I found absolutely wonderful. 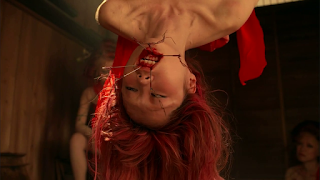 For those who know me, I love Takashi Miike's work. From Audition, Ichi the Killer, 13 Assassins, Gozu, Visitor Q, etc etc, Miike perfectly mixes beautiful cinematography and grotesque imagery, and this Masters of Horror feature is no exception. One of the biggest complaints I've heard about this movie, was that the Japanese actors and actresses spoke clear english, but it didn't bother me, and it didn't take anything away from the film itself. I think my favorite part of the movie has to be the make up and special effects. The deformed woman's face looked incredible, with her slit mouth and fleshy eye, the torture scene with the needles being pushed into the nail beds and gums. I truly cringed at it all, especially when it comes to shit being stabbed into nails, UHG. Just like the rest of Miike's work, I applaud this film. It went passed my expectations, and I saw things I never thought I would. If you think you're ready to step into this, go for it. It's a beautifully made film, and I would suggest this to anyone who wants to take their love for horror to another level. I picked it up on Amazon for $6, talk about cheap, so don't be an asshole and download it, spend the $6 and buy it!