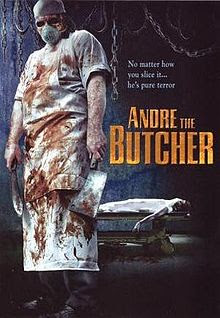 LESBO CHEERLEADERS, ESCAPED CONVICTS, HUMAN CHILI... RON JEREMY! If you're a fan of these various topics, then I think you'll enjoy ANDRE THE BUTCHER. This is what I consider a "high school classic", just one of those movies my friends and I watched constantly. Not that is was "really great" movie or anything, it's just fucking hilarious. ANDRE THE BUTCHER, is a 2005 sleazy slasher movie, written and directed by Philip Cruz, and starring none other than the Hung Hedgehog himself, Ron Jeremy. We follow a group of Cheerleaders on there way to a competition and get stranded a long the way. Since Cheerleaders are the brightest in these kind of films, they walk to a house they find in the middle of nowhere, and who owns this house your ask? Well, no shit, ANDRE THE BUTCHER. Let's discuss some of the hilarity that ensues in this ridiculous slasher flick.

When you see the cover to this movie, you're like, "Holy shit, this looks pretty nasty. Huge guy covered in blood holding a knife and cleaver, WHAT COULD GO WRONG?". I see this more as a comedy than anything else, and that's not a big issue. The reason this movie just works is mostly due to Andre himself. I thought Ron's acting was hilarious, as if he wasn't really taking the roll too seriously. ANDRE THE BUTCHER's mannerisms were the best part, especially this "touchdown" gesture he would make every time he would kill something. His silliness doesn't take away from the movie, because as funny as Andre can be, he is just as brutal. He spends most of the film stalking the Cheerleaders, but a couple of escaped convicts hold them hostage inside the butchers house. This movie is a little guilty in trying to cram in as many sub plots as it can, but at least they're small. We have the religious girl who's conflicted with her desires for other women, A chunky cheerleaders who's ashamed of her weight and likes the dude cheerleader, escaped convicts who actually aren't really bad dudes, a sheriff who's a major piece of shit... and comic relief, ANDRE THE BUTCHER. These boring little subplots are brilliantly broken up by Andre and his antics. If it weren't for Ron Jeremy, this movie wouldn't even be worth watching. He stole the show.

The effects were pretty great, especially for a low budget slasher like this. Lots of great dismembering gags, and just blood spraying all over the place. Every time so one gets slashed, a few gallons of blood are going to come rushing out. There was even a little scene where Andre picks a scab off of his arm and eats it, fucking gross, but awesome. There was even a really awesome scene of Andre jumping away from an exploding car. Bad. Ass. I know I've picked on the plot a bit, but all in all, it was a really fun movie. Hilarious, sleazy, bloody, and an over all decent movie. I'll post the trailer below, and let me know what you think. It'll probably be pretty cool seeing Ron Jeremy poke a chick on video with something other than his dick (THIS WON'T BE THE LAST MOVIE I REVIEW WITH MR. JEREMY IN IT). 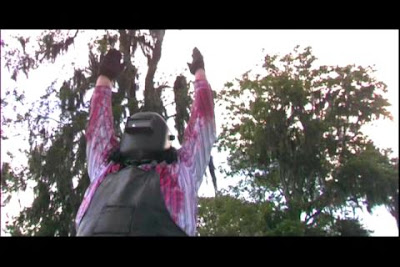 Blood Feast is getting a remake?!

I can't believe this went over my head. After a day of Herschell Gordon Lewis and remembering his brilliance, I stumbled across an article about the BLOOD FEAST remake coming out this year. I'm a little biased when it comes to horror/exploitation remakes, but I was pretty intrigued with with what I saw. You got Robert Rusler from NIGHTMARE ON ELM STREET 2, Caroline Williams from TEXAS CHAINSAW MASSACRE 2 and HATCHET 3, Sophie Monk from THE HILLS RUN RED, and the trailer was pretty fun right off the bat. The gore already looks fantastic, and it even seems to be staying fairly close to the material... even if the original didn't really have a great plot to begin with. I have high hopes for this, and even though the writer and director of this film worked on SEED 2, it might be a pretty fun little movie. So far I haven't seen a release date, but it is scheduled to come out this year. Check it out for yourself. You think Herschell would enjoy this? Let me know!

Fuad Ramses and his family have moved from the United States to France, where they run an American diner. Since business is not going too well, Fuad also works night shifts in a museum of ancient Egyptian culture. During these long, lonely nights he is repeatedly drawn to a statue representing the seductive ancient goddess ISHTAR. He becomes more and more allured by the goddess as she speaks to him in visions. Eventually he succumbs to her deadly charms.
After this pivotal night, Fuad begins a new life, in which murder and cannibalism become his daily bread. He starts to prepare a ritual FEAST to honor his new mistress, a lavish affair dripping with BLOOD, organs, and intestines of human victims. As butchered bodies are heaped upon the Altar of Ishtar, Fuad slowly slips further into madness, until he is no more than the goddess’s puppet; and she thirsts for the blood of Fuad’s wife and daughter too…
"A crazed blood drenched reworking of the splatter classic" - FRIGHTFEST UK

"This is more than a remake, it's the revolution of a classic" - STUFF FILM FESTIVAL

"A dark, deranged and surprisingly psychological quote on H.G. Lewis gore cassic" - SHOCK TILL YOU DROP

"You can't escape the darkness of BLOOD FEAST!" - HORRORSOCIETY.COM

These 5 films by the Godfather of Gore are my favorites, so they're not in any particular order. If you're not familiar with Herschell Gordon Lewis, or his films, I highly suggest these films. They're very gory and sleazy, so if seeing women getting dismembered with a chainsaw, or naked, isn't your thing... Don't watch 'em... prude.
1. BLOOD FEAST
An Egyptian caterer kills various women in suburban Miami to use their body parts to bring to life a dormant Egyptian goddess, while an inept police detective tries to track him down.
2. THE GORE GORE GIRLS
A ditsy reporter enlists the help of a sleazy private eye to solve a series of gory killings of female strippers at a Chicago nightclub.
3. THE WIZARD OF GORE
A TV talk-show hostess and her boyfriend investigate a shady magician whom has the ability to hypnotize and control the thoughts of people in order to stage gory on-stage illusions using his powers of mind bending.
4. 2000 MANIACS!
Six people are lured into a small Deep South town for a Centennial celebration where the residents proceed to kill them one by one as revenge for the town’s destruction during the Civil War.
5. THE GRUESOME TWOSOME
Mrs. Pringle and her son Rodney run a wig store which they stock by scalping young coeds who show up to look at the “room for rent.”

HOPE YOU ALL ENJOY!

- Jake. BUY THESE MOVIES AT SOMETHING WEIRD VIDEO 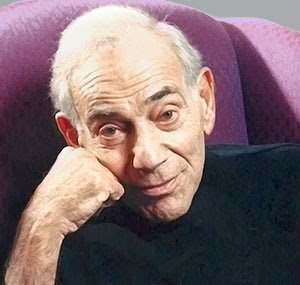 I remember buying a copy of Basket Case on DVD when I was thirteen, and I know what you're thinking, HERSCHELL GORDON LEWIS DIDN'T MAKE BASKET CASE!!! Well no shit, I was getting to that. I remember opening up the case, and seeing an advertisement from SOMETHING WEIRD VIDEO. Man did it look cool, a mini catalog full of vibrant and gory pictures, most of which were from Herschell himself. Seeing ads for films like BLOOD FEAST, WIZARD OF GORE, and 2000 MANIACS, my fragile morbid mind couldn't handle it, I had to see them. Through, sadly, illegal means, I watched a couple of the movies through torrents (Remember Limewire anybody? and don't worry, I own them now) and I was floored. It was nothing I've seen before. Gross and sleazy stylistic gore at it's finest and I began cramming my head with more and more HGL. To me, movies like Halloween and Friday the 13th were child's play now, I want more sleaze and gore! Sure, the plots don't make sense, and the acting is pretty terrible, but HGL knew what he was doing when he made those films, and little did he know with his film BLOOD FEAST, he would create an entire new genre. Splatter came bashing in, and soon the world was obsessed with violent and sleazy cinema. Not only is he the "Godfather of Gore", he's considered in my book as the "God of Extreme Horror".

Sadly, as most of you know, Herschell Gordon Lewis passed away today. He was 87 years old. I'm sure that this was a huge blow to everyone who loved him, and his work. In honor of Herschell, I'm definitely going to be playing BLOOD FEAST, and many more of his films tonight, as I'm sure many are doing. Rest in Peace Herschell, The Godfather of Gore!