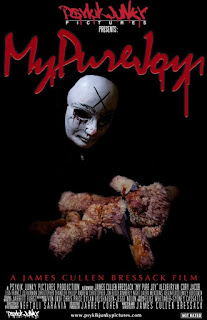 Borrowed this movie from a friend of mine months ago and finally got around to watching it after making a list of things to watch. Just by looking at the cover and reading the synopsis, I was weary. Was this going to be just a low budget, cookie cutter slasher movie, or something completely twisted and unrelenting? Sadly, all I got from this was the former, a cheap, low budget, and boring mess. Don't get me wrong, it's not terrible, and I honestly thought it was going to be great after the beginning murder sequence, but it all just went down hill from there. Diologue that just runs on forever, boring actors who act terribly, and the lack of any substance within the story, defintely makes for a crap movie. Lets dig into this turd before I flush it down for good. 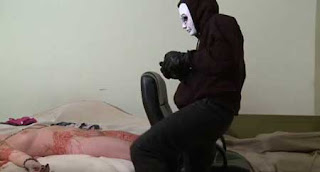 The movie revolves itself around it's main character, Adam, who's got serious daddy issues, and a great love for violent horror movies. He spends most of the film talking about girls and horror movies with his friends than actually killing anyone. I guess the whole point of the movie was that he's kind of blurred the line between reality and pretend, killing people based on deaths he's seen in movies. For example, one of the first deaths in the movie was based off of the infamous shower scene from Hitchcock's "Psycho", although a much more violent version of that. I was pretty amped by this, just because I thought of the fact that paying homage to classic gory movie scenes would be kind of cool... but it totally missed the mark. The "Psycho" one was the only one I could really place, and the other deaths were just pretty boring. It did have that one "shock" scene, in which he stabs a girls pussy and shows the penetration... but you could really tell how fake it was, and the acting in general just wasn't convincing enough. Between all of these lame deaths, are long and drawn out conversations with his two stoner buddies. These hang out sessions would last what felt like forever, and I got sooooo bored with them. I had to rewatch a few scenes, because I kept getting distracted from the movie. It was just a boring and bland mess.

Luckily, I borrowed this from a friend, therefore I didn't have to spend money on the dull sack of shit. I don't want to be too rough, it does look like there was some effort put into this movie, but more like the effort of a couple stoners who said to themselves one day "Hey, dude, we should make a fucking horror movie". It reminds me of the times I've made horror movies with friends back in High School; write about how these people would die, then adlib all of the dialogue. It seems just like that. Maybe this will help the director out though, as far as getting some funds for his next movie, and maybe putting together something a bit better. Everyone has their shitty beginnings, so hopefully we see some gold come out of this.