John Waters, the master of filth and sleaze, is getting help from Criterion and Janus Films to re-release his second feature film, Multiple Maniacs. The 1970 obscure classic is centered around Divine, and her side show circus of freaks and sickos. The show, also know as "Lady Devine's Cavalcade of Perversions", is more of a set up to kidnap and kill anyone who attends the show, and going from town to town spreading filth where they go. I'm honestly excited with this, because I already own and have seen it a couple times. Even last week I re-watched it after hearing about this re-release, and getting myself amped up to see a great restored version of this movie. The VHS copy I have isn't terrible, but the video and sound quality is so dated, and nearly impossible to watch on a flatscreen. Luckily I had a little shitty tube tv with a built in VCR in my closet... how wonderful. 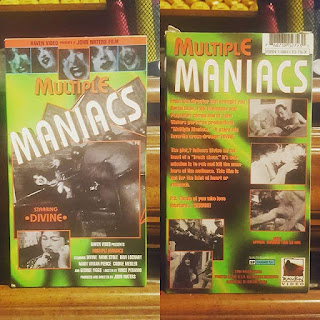 Multiple Maniacs, much like the movies to follow after, is a ridiculously silly and shocking film which pokes fun at the prudes and hippies of that time. Anything gross you can think of to piss off the light-hearted, John Waters does. I remember my first time watching it, and one of the carnival freaks in the movie was called "The Puke Eater", he just sat on the floor and ate a big pail of vomit. I was totally disgusted, but at the same time it was hilarious, especially picturing myself showing this movie to my friends and family. It does it's job of shocking you, but it's also very funny, and another thing I'd like to add is that this movie was pure anarchy. John Waters really knew how to stick it to the man with his films, whether there was a message or not. Shocking people and pissing them off has got to be a great feeling, especially with such a crazy film such as Multiple Maniacs.

I'm not even sure what to say about the film without spoiling anything, because it's just one of those movies you want to make people see. I guess you'll have to wait until the movie is re-released. The only thing is that I haven't seen a release date yet, for the theatrical release, and the blu-ray. If you're ansty, you could probably find a copy of it on ebay for a decent price, or if you're lucky like me, you'll find it in some rundown Savers for twenty five cents. This movie is not for the faint of hearts, but if you're already into his other films, especially Pink Flamingos and Female Trouble, you'll most certainly like it.