Lights Out Review by Tyler Aucoin 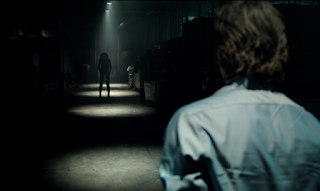 Every time a PG-13 Horror film is released, I stop for a second and wonder if it's going to be something legitimately captivating, or yet another vicious cash grab. I can safely, and proudly, declare that Lights Out is most definitely the former of the two. We open in a dimly lit warehouse, with the sight of mannequins grouped and scattered about. There has always been something unsettling to me about the sight of mannequins, but truthfully,that's not exactly where the real horror lies. Lurking in the darkness is something much more sinister.

Our film centers around a family living in Los Angeles. We have the mother, Sophie (Maria Bello), who suffers from an obvious mental disorder, her son Martin (Gabriel Bateman), and her daughter Rebecca (Teresa Palmer). From what we can infer, it appears Rebecca had to distance herself from her own mother at some point. She lives alone in a dingy downtown apartment, but for a character such as Rebecca, this does not affect her in the slightest. Besides, she is not always alone. With the company of her boy toy Bret (Alexander DePersia), she seems to find a way to get through (most of) the nights until the lights go out and she sends him packing. The acting for most of these characters is solid, with the exception of Bret. I wouldn't exactly hold it against him, for my concern lies more with the way his character is designed to be at Rebecca's beckoning call, even when she pushes him away at certain points in the film. 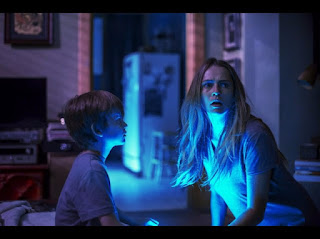 Martin begins to have horrific experiences where his mother is communicating and interacting with someone she refers to as Diana. From what he can tell, Diana does not seem to be, or even act, remotely human. Martin is left to assume who, or what, she could be, and is only given hints by what he sees and feels through the darkness. Rebecca mentions to Martin that she used to have nightmares about Diana when she was his age. Are these only nightmares, or is Diana much more real than we're led to believe? 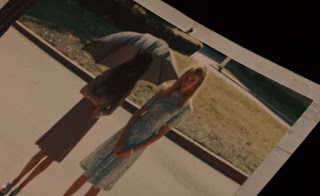 If there's one thing to say for Lights Out, it's that the scares are not cheap, and that's not something you hear every day about a Horror film. I suppose you could classify a couple of them as “jump scares”, but I would say aside from those, they are very much earned and work effectively. Contrasts between light and darkness are drawn from multiple Horror films over the years, but Lights Out manages to truly play with the lighting in most scenes. This keeps us on the edge of our seats, waiting for Diana to emerge from any available darkness, and at any given moment.

It's honestly hard to say too much without attempting to spoil anything, so I will wrap this up as clearly and concise as possible. The story is one of the best things this film has going for it. There are too many films where the monster exists, just because. Diana's story is ultimately freaky, and may stick with you long after you've departed the theater. I, for one, was looking around the establishment every time the ceiling panels would crack, or when a nearby theatergoer rocked in their chair. You're not going to find excessive amounts of gore and language here, and I am totally okay with that. Lights Out doesn't need those factors to chill you to your core, just a couple of shots of Diana rocking back and forth in the darkness, scratching at the floor, was enough for me to keep the lights on. 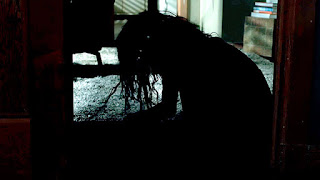