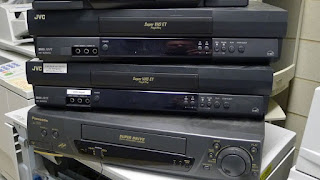 My fellow movie collectors and VHS nerds... the VCR has officially been killed off. The last VCR manufacturer in Japan, Funai Electric, has announced that they will stop making VCR's this month, bringing it's forty year reign to an end. One of the factors leading into this decision was that fact that Funai couldn't compete with the growing sales of DVD and Blu-Ray players. Last year, Funai Electric only sold about 750,000 VCR players, so with trailing sales, and the fact that VCR parts were becoming more scarce, Funai finally threw in the towel. As a collector, and all around appreciator of the VHS format, this really tugs on my heart strings. For me, it's just another piece of history, a device I've spent almost every waking moment being near, as a child, and an adult.

I have a lot of fond memories of my first VCR. I think I was eight, and I just remember having this little entertainment center with a thirty inch tube TV and a ridiculously old VCR my mom might have had from the 80's. I had a few tapes, mostly cartoons of everything from Ren and Stimpy to Robotech, but it was because of this instant access to movies that I started to really expand my mind. I began sneaking tapes out of the living room a night, anything I could find, especially movies I shouldn't be watching. It was really my first leap into horror movies, watching movies like Scream, The Blair Witch Project, and classics including A Nightmare on Elm Street, and Night of the Living Dead. I can see it now, an 8 year old Jake, sitting on the carpet of his room, and absolutely enjoying my midnight viewings in that shitty old tube TV, through that shitty old VCR.

Even though the VCR is dead, I don't necessarily thing the VHS format is close to dying. I see independent filmmakers putting their films on VHS all the time. Hell, comic con even put out a special edition VHS for Deadpool this year. The people still enjoy it, and when it comes down to it, a lot of films that came out years ago on VHS, will probably never come out on DVD and Blu-ray. So many great and unknown horror movies are being sold for hundreds, even thousands of dollars, because they can only be found in that format. I have a pretty decent collection myself, and it's almost impossible to find a lot of the movies I have on DVD. The VHS culture will never die as long as people keep putting them out and collecting them.

It's truly an end of an era, and may the VCR live on, either on our shelf, or in your parents attic. 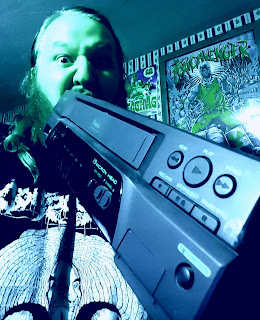