The Art and Manga of Hideshi Hino 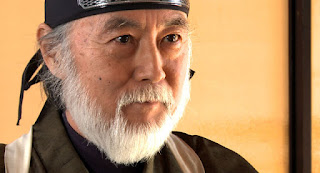 To keep this week in Guinea Pig mode I figured we would talk about the man who directed and wrote the two most memorable films of the Guinea Pig series, Hideshi Hino. Not only did Hideshi write, direct, and star in Flower of Flesh and Blood, but he also wrote and directed Mermaid in a Manhole, both incredibly gruesome flicks. These may be the only two movies he has directed, but his manga has attributed to other films such as, Death Train, The Boy From Hell, and Dead Girl Walking. Hideshi Hino's horror manga has been a staple amongst those into the macabre, with his depiction of heinous serial killers, wild beasts, and rotting corpses being his main forte.

Hideshi has had quite the life growing up. He was born in Qiqihar to Japanese immigrant workers in Japanese-occupied Northeast China just when Japan surrendered at the end of World War II to the invading Soviet forces. Hideshi has claimed that he was nearly killed on route to Japan by his fellow townspeople during the evacuation from China. Some of his manga have been based on his life and its events; for example, his grandfather was a Yakuza and his father used to be a pig farmer with a spider tattoo on his back. Hideshi has depicted these in his manga many times (as in Panorama of Hell). He originally wanted to get into filmmaking, but thanks to manga artists such as Shigeru Sugiura and Yoshiharu Tsuge, he began to express himself in the manga medium. He originally self-published all of his earlier work before getting his work published in the manga magazine COM in 1967. With appearances in Garo magazine and the serialized "Hideshi Hino's Shocking Theater" coming out in 1971, it was well aware that he was going to stay in that horror space. He even found a following in the shojo manga crowd, which is manga aimed at teenaged girls, thanks to his stories like Dead Little Girl and Ghost School.

I absolutely love his art style. Black and White with ink, highly detailed and grotesque. There is so much detail in every panel I see, and it's like all of the images are just popping out at you, screaming in your face. This is the kind of stuff I'm always looking for in a good horror comic. Loads of detail, and gritty as fuck. And when I mean it looks "grotesque", I mean it looks fucking awesome, and not all of it looks disgusting. Some of his artwork is just bizarre, or beautiful. I'll post some examples and links below, and a list of all of the books he has out. I highly recommend him to anyone who enjoys horror manga, or horror comics in general and art in general. Enjoy!

Interested in checking out his work? Here's a list of manga that has been published outside of Japan. 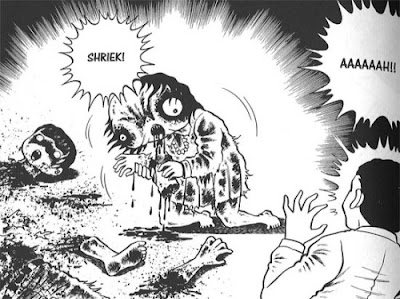 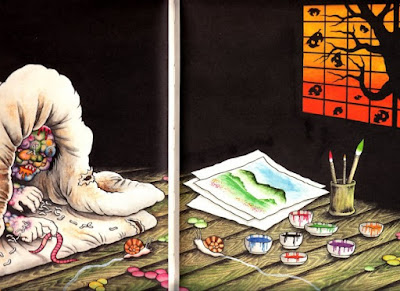