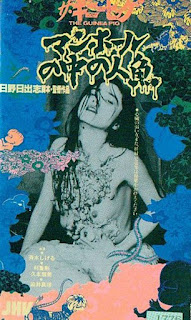 Yes, you read correctly. MERMAID IN A MANHOLE is part 6 in the GUINEA PIG film series, and you're probably wondering why I'm going in this order. Thanks to oddly timed productions on other sequels, MERMAID was released fourth in line. Part five, and four then came out afterwards, in that order. I'm not even going to question why this happened, considering these films are incredibly weird to begin with. This part was very cool though, much less violent than the previous three, but it's definitely the most disgusting out of them. An artist, who is roaming around the sewer late at night, and finds a mermaid stranded and sick. He then takes the mermaid home, because he remembers her as a child, seeing the mermaid at a local river. Supposedly he's in the process of coping with the loss of his wife, and I guess painting a sick mermaid is going to make that better. Can this film get any weirder? Oh boy, it fucking does.

For a sea creature to be stranded in the sewers for as long as she had, the mermaid obviously got a sever infection. Throughout the movie, she begins developing wounds and boils all over her body. The makeup was great, and the pulsating, oozing pus filled sacks on her body were delightfully disgusting. What I really liked is that all the wounds had different color pus. Yellow, green, purple, red, blue... this is when the painting comes into play. The mermaid asks the artist to paint her portrait, but the paint would be her blood and pus. Weary neighbors begin to question the nasty stink coming from his apartment, but pass it off as rotten fish. Well, they're not technically wrong, considering the status of the mermaids health. She's covered in boils and oozing pus and blood from every direction. The artist has finally had enough he butchers the Mermaid, leaving body parts and gore all over his apartment. Blood begins to leak into the apartment below, and the neighbors call the cops. The artist is arrested and... well, I'd go into more, but the movie has such a great twist ending. So I'll leave it there. 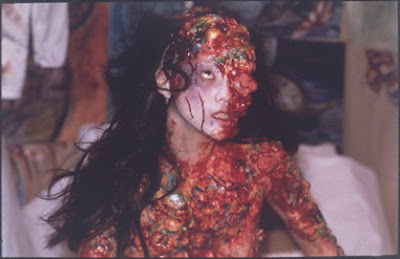 I honestly loved this movie. The whole feel of it was nice. It was dark, but colorful, and it was just overall visually pleasing. The special effects may have been more on the gross side, but they looked great. I haven't been grossed out by pus in awhile, not since DEAD ALIVE at least. It was a very well made movie, and I know I won't spoil it, but the ending was fucking awesome. WHAT A TWIST. I highly recommend this, and for the reasons I stated above. It's just a fun movie, and if you want to check it out I'll post the film below. Let me know what you think, and enjoy!