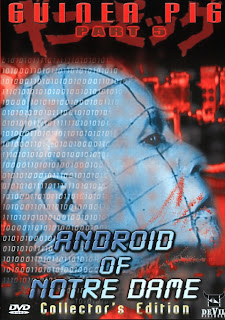 Here we are again folks, going into day 5 of GUINEA PIG WEEK, and it's been quite the fucking adventure. Today, we enter the 5th installment of of the GUINEA PIG series, ANDROID OF NOTRE DAME, a tongue in cheek gory science fiction movie with midgets, naked women, and robotic severed heads. I thought of it as a goofy Japanese version of RE-ANIMATOR. The film follows a demented dwarf trying to find every possible way to save his ill stricken sister. A mysterious man calls the little scientist, black mailing him into buying a female corpse to experiment on. It looks as though he might have struck genius, but he completely botches the experiment, and in a fit of rage he mutilates the corpse. Herbert West meets the Lollipop Guild... Holy shit. It's a pretty interesting movie so far. I mean, it's fairly silly, and the gore isn't too convincing, but it's been pretty entertaining nonetheless. I think the shear corniness saves it, considering this does feel as one of those "I would do anything to save a relative at all costs" type of movie. 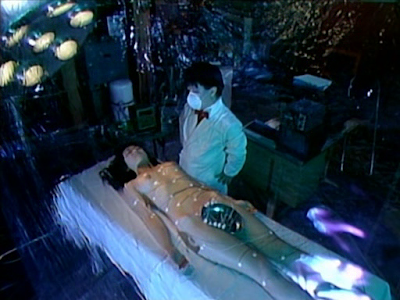 Soon after, the stranger shows up to the midget scientists house, once again offering a corpse in exchange for money. This time, however, the scientist decides not to pay for his next cadaver, killing the visitor instead (by removing his legs with a buzz-saw booby trap), and using his re-animated severed head in a series of tests. Eventually, the girlfriend of the dead guy comes looking for her hubby, but also becomes a victim of the dwarf, thus providing him with a suitable body into which he can finally transplant his sister's 'consciousness'.

This installment seems so removed from the other movies, which really focused on the realness of the gore, and graphic violence. ANDROID OF NOTRE DAME was almost too hokey, and the special effects weren't nearly as good as they were in previous installments. It's not a terrible movie, and it is entertaining in it's own right, but it is a total let down, especially compared to MERMAID IN A MANHOLE and HE NEVER DIES. Luckily, like the rest of these movies, they're all under an hour long, making them an easy watch. I would rather recommend other GUINEA PIG films to you over this one, but if you're interested in checking it out for yourself, I'll post the video down below. Let me know what you think, and enjoy! 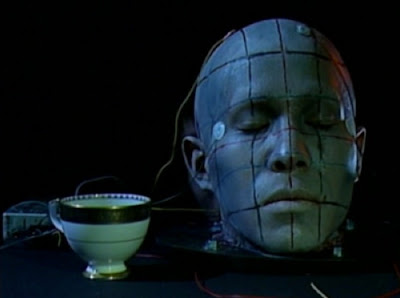