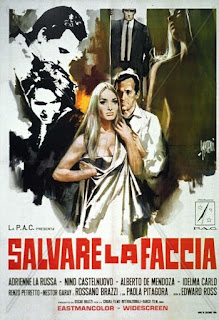 I reached out to facebook today and asked for some suggestions. Only one person replied, and she told me to check out this old Italian exploitation movie "Psychout for Murder" (Also know originally as Salvare La Faccia). Psychout for Murder is a 1969 Italian thriller directed, written, and starring Rossano Brazzi. It follows the story of a young woman, Licia (Adrianna La Russa), who is taken to the mental hospital after being caught with her boyfriend, who also organized the whole escapade to black mail her father. Why is she taken to the mental hosptial? After all, teens will be teens. Licia's parents sent her away to so the family can salvage their reputation. Very shitty is you ask me. After Licia leaves the institution, she begins to carry out her revenge, especially to her father (Rossano Brazzi).

I found this movie fairly interesting. It was very well acted, and the revenge story is very well thought out. I've seen this refer'd to as a "Giallo" movie on IMDB and such, but it's really not as violent other films though would be considered Giallo, like "Hatchet for a Honeymoon" (Mario Bava) or "Deep Red" by Dario Argento, but when it does start getting violent, it is effective. This movie didn't have to have the gore to be a good movie, it had brains, and intensity. You can really see this with the main actress, Adrianna La Russa. She just sells every moment in this, absolutely crushing her family from the inside out in incredibly twisted and genius ways. She gets her brother in law to cheat on her sister, and cause her to commit suicide, she kills her ex-lover by drugging him, and tying a string from a door knob, to a gun, so when someone walks in the room, he gets blasted in the face. Like seriously, how can you not love the craftiness! All of this added with incredible acting and great cinematography, it makes for a very enjoyable movie. 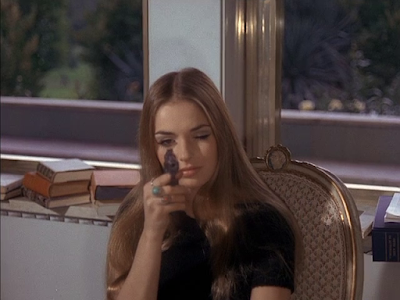 My only con with the film would probably be the pacing in the beginning of the film after Licia is released. It seemed very slow, and I wasn't sure where the film was going with her, but with patience it all works out in the end. Maybe I shouldn't be too judgmental about that, cause the scenes did help add to Licia's growing hatred for her family, like scenes of her stomping on her sisters flowers, and pointing unloaded guns at her father. Adrianna La Russa was astounding, and so was Rossano Brazzi, I mean the guy wrote, directed, and played a major role in the film. Thats just astounding. What's great about this, is that the whole movie was on youtube for free, and I'll link the film below for those who would like to check it out. I very much enjoyed it, and maybe you will too. Enjoy!