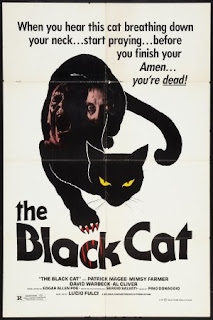 A couple weeks ago, Ty and I took a trip out to Newbury Comics at the Solomon Pond Mall with Beef, and checked out their horror selection. To be honest, it was pretty weak. The horror selection used to be pretty decent, and they even had a Troma section! I still left with a few goodies, and the best movie I took home that day was Lucio Fulci's The Black Cat. I saw it a couple times on TV years ago, and since I found this on Blu-ray I was incredibly excited to see what it looked like in its 2k restoration. I'm already familiar with the story, considering this is loosely based on the Edgar Allan Poe story of the same name, and the original story was about a man who kills his pet cat out of a fit of rage, and is then tormented by the spirit of the Black Cat. Lucio's version is fairly different. The Black Cat in this story seems to be controlled by a supernatural force, and if the cat is in your presence, it will try to kill you. The cat is owned by Robert Miles (played by Patrick Magee), a median and ex-professor who spends most of his time making EVPs (Electronic Voice Phenomena) in crypts, and dicking around with his bitter cat. I think this movie is incredibly under-rated. It's classic gothic atmosphere, wonderful cinematography, and amazing violence is something to be truly admired. Let's take a big ol' rip and discuss why The Black Cat is one of Fulci's greatest movies.

Did I mention that this movie looks fucking astounding on Blu-ray? This has one of the best restoration jobs I've ever seen! But let's get back to the film. So like I stated before, Robert Miles is a medium who can speak to the dead, and control the mind of his cat. I really like this character, and it's probably because he has this classic Boris Karloff feel to him. Every time this cat seems to show up, he seems to attack someone, kill someone, or cause someone to kill themselves. I mean the first scene of the movie is a random guy getting into his car, and seeing a snarling Black Cat in his back seat. He looks hypnotized after looking at the cat, and slams into a parked truck, causing himself to go through the wind shield and start a fire. The cat then makes its way home, where we see Robert Miles listening to his recordings. We then cut to a woman taking photos near an old cemetery, an American photographer by the name of Jill Travers (Mimsy Farmer), discovers an open crypt and decides to venture into it. While taking photos, she finds a broken microphone, and not too long after, she's stopped Sergeant Wilson (Al Cliver) who tells her not to go in there again. The movie then cuts to a couple of teens making out on a boat. Other boaters pull beside them, so they take off to find privacy in an old boat house, where they continue to get it on. The boyfriend locks the door, and reassures his girlfriend that everything will be alright... Well, when they begin to have sex the lights go out, and the key goes missing. It looks like something bashed through the ac vent, snagged the key, and slashed the wires. Almost ridiculous to think a cat could do that. But this scene really sets up the whole movie, because later on this couple will be reported by the girls mother, Lillian Gayson (Dagmar Lasander), and an inspector from Scotland Yard comes to help out, Inspector Gorley (David Warbeck).

Jill finally tracks down Robert after searching for the owner of the microphone. He tells her he is a medium, and that there are others who possess such powers. He even tries to hypnotize Jill until the cat jumps up and claws up his hands. Pretty fucking weird scenario. This is where Robert explains that he's supernaturally tied with that cat, and that eventually the cat will kill him. I got to say, this cat is incredibly intimidating. Every scene with it in the backroom, screeching, or darting around... my god, creepy little fuck! With each murder, Jill and Inspector Gorley seem to discover something incredibly strange about the case. At every crime scene, there appears to be cat scratches on the corpses, or cat hair in the premises (besides Lillian's death, where she was burned alive... the special effects were hilarious). Jill begins to dig into the case, showing Robert photographs of the crime scenes. She later discovers that Robert has had close ties to the people who have died, including being romantically involved with Lillian Gayson many years ago. She begins to suspect Robert of possessing the cat into killing, but he says it's the cat who controls him. That night Robert even drugs and hangs the cat in front of his window, but he unleashes dark forces, and those dark forces also catch Jill in the dead of night. Robert is cursed, and even Inspector Gorley is attacked by the creature, hypnotized, and hit by a car. What a cluster fuck. This movie really plays on the old wives tale that it's bad luck if a black cat crosses your path. 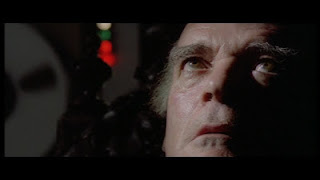 The next day, Jill is certain that Robert is the killer, and breaks into his home. She searches through his office, listening to audio recordings of the dead, but when Robert suddenly comes home, Jill books it to the basement and runs into the cat, who appears and disappears before her eyes. She runs in terror, and is attacked by bats, and then knocked out by Robert. She eventually wakes up and finds her self bound and gagged in the crawl space. Robert begins to lay brick in the wall, burying her in the wall alive. He even empties out her hotel, making it look like she already left. Inspector Gorley, who survived the car crash, comes over with the Sergeant and another Inspector to look for any signs of the cat at Roberts house. They couldn't find a thing until they heard a faint cry, the whining of a cat. They come across the freshly built wall and bash it down, finding Jill barely alive, and the cat. Robert had no idea the cat was even in there, but he then tells Gorley that the cat won, and he admits defeat.

I don't see why this was so under-rated. It's a very well made film, and I can't rave about the cinematography and acting even more than I have. I think the silliest thing about this movie was the fire scene. When Lillian is set ablaze in her house, she's replaced with a very bad dummy, and every time the dummy movies the arms would wiggle around like little dildos. I very much enjoy this movie though. The cat steals the show and I'm even creeped out by it at parts. I highly recommend this for those who are into the old gothic style hammer films, but who also love a little extra blood. It's definitely not his goriest flick, but the blood and violence was used appropriately. I'll link a trailer below and tell me what you think about it. Enjoy!

THE BLACK CAT ON AMAZON