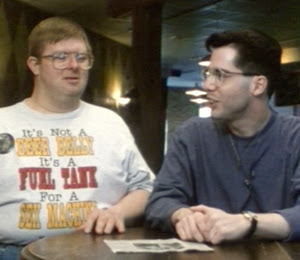 Considering the events of the week I've just been stuck in Troma mode, but today, I'd like to talk about a little documentary Troma put out called "Jefftowne". Jefftowne was directed and written by Daniel Kraus. It's a documentary that follows the life of Jeff, a man with down syndrome, and his adventures in alcohol consumption, porno mag collecting, and wrestling fanatisim. I didn't know what to think about this film at first. When I read about it, I thought it was going to be a silly exploitive kind of film following around a drunk mentally retarded man, but I was absolutely wrong... kind of. I really liked this movie, and to be honest, before I started writing this review I've already seen in a few times. This is one documentary I always suggest to people, especially if they're looking for something a little different. Everything about this film is just interesting. It's funny, sad, intense, awkward, and Jeff is just such a character to begin with, that you're just automatically interested in this person.

As funny as Jeff Towne can be, there are a lot of dark sequences. Most notably is the scene where Jeff sits down with a lady friend and they talk about this woman that Jeff met. He talks about all the weird sexual things she did to him, and even said that she stuck a needle in his arm. I was floored, and just distressed. I felt terrible for the guy. Those gritty moments don't last to long though. They're usually followed up with Jeff and his adoptive grandmother bickering to eat other, or Jeff showing his porno collection to everyone. I should also mention the scene with his foot. Jeff has terrible circulation, leaving his foot all swollen and purple. That shit looked painful, and due to his circumstances he doesn't seem to go to the doctor too often. I mention that because there was another scene where Jeff had a bunch of infected teeth and needed a bunch of them to be pulled, and since his mom can't drive (wheel chair bound), he waited until someone at the theater could give him a ride. Sheesh. This movie perfectly captures the grittiness of lower middle class living, considering Jeff's living conditions were fairly poor, and just the fairly rough life of someone like Jeff. Having no guidance and such, he would surely start collecting porn and drinking (not that collection porn and drinking is terrible), but with the needle story I mentioned above, it can lead Jeff to things such as that scenario. I definitely feel bad for Jeff, but there was a guy on the documentary that had this "theory" about Jeff, and it pissed me off. This guy goes into his theory, and how Jeff really isn't retarded and that he uses his disability to get free drinks, food, feel up chicks, etc etc. And this guy almost seems JEALOUS about it. Even is that was true, why the fuck would you be jealous about not getting away with groping chicks and getting free shit? I thought he was a dickhead, and I was glad that he was only in that scene. 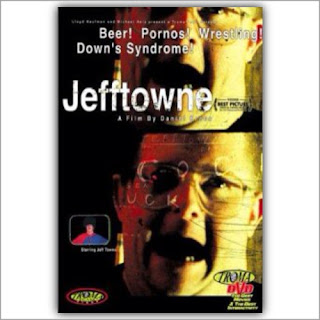 I just really enjoy this movie, and I highly recommend it. As silly as some of the tag lines are, the movie is as ridiculous as it sounds. Sure, there are scenes with Jeff pounding beers and looking at porn, but there are a lot of interesting and dark parts too. It's always throwing these different scenarios at you, keeping you interested from beginning to end. I think you can buy with movie for just a few bucks on the Troma website or Amazon, and it's also on Youtube for free on the TromaMovies youtube channel (links below). Check it out, and let me know what you think!