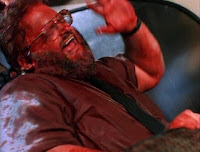 Last Tuesday on May 23rd I was opening up at my job and getting ready for the eight long hours ahead of me. On one of my down times I ordered some lunch, chilled out, and dicked around on my phone. Then I saw the dreadful news... Troma's biggest action star, Joe Fleishaker... has passed away. I was honestly bummed, and thought about it all day. After my long day at work, I knew I had to watch some Troma movies, and honor Joe the best way I could... gorging on some pizza and wings, and rippin' the bong.

For those who don't know, Joe Fleishaker was the actor known for being in Troma movies, including Troma's War, The Toxic Avenger 2 and 3, Citizen Toxie, Sgt. Kabukiman NYPD, Tromeo and Juliet, Terror Firmer, Tales from the Crapper, and Poultrgeist: Night of the Chicken Dead. I really consider him to be the third most recognizable Troma character, one and two being Toxie and Kabukiman, and he really takes the cake for some of Troma's most memorable scenes. Some of my favorites would have to be one scene in Terror Firmer where he's hacked with an axe and eaten by the escalator, in Citizen Toxie he played The Toxic Avengers sidekick Lardass, and his alternate character Chester, a scientist who gets by being a hooker for pastries, and how could we forget about Joe's portrayal as Subway's Jared in Poultrygeist. I remember when Ty let me borrow that movie for the first time, and my goofy immature ass lost it when Joe shit himself thin in the bathroom. With all of these memorable roles and scenes, Joe became a huge fan favorite, and he was featured in a ton of Troma's promotional videos and Troma's Edge TV. I should also mention that Joe also played Troma's co-founder Michael Herz in a lot of those promotional videos, so much that fans mistook him for the real Michael Herz. Aside from his Troma roles, he was a recurring character on The Late Show with David Letterman, either playing David's son or father. I always heard rumors of a supposed Joe Fleishaker cameo in the latest movie Return to Nuke 'Em High Vol. 2, but in July of 2012 Joe was admitted to the hospital and was diagnosed with heart, lung, and kidney failure. Something all too common when it comes to morbid obesity, as Joe's weight reach as high as 525 pounds. On the day Joe died, it is believed that he died from a heart attack. He passed at the young age of 62. 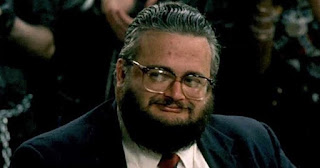 Joe Fleishaker will always be apart of Troma history, and in the hearts of many Troma fans around the world. If you're reading this and don't know who Joe Fleishaker is, or what Troma is, I highly suggest you go to the Troma Movies youtube page, where you can find many of Troma's films for free, including the ones starring Joe, and watch them. I highly suggest Terror Firmer, Tromeo and Juliet, Citizen Toxie, and Poultrygeist. You'll never forget any Joe Fleishaker scene after watching any of those. Troma also posted a very nice video dedicated to Joe, in his passing. All of Troma's links and the video will be linked below. There really isn't anything better than sharing these films with other people, and as I end this blog post I say REST IN PEACE JOE FLEISHAKER, WE'LL MISS YOU! :'(